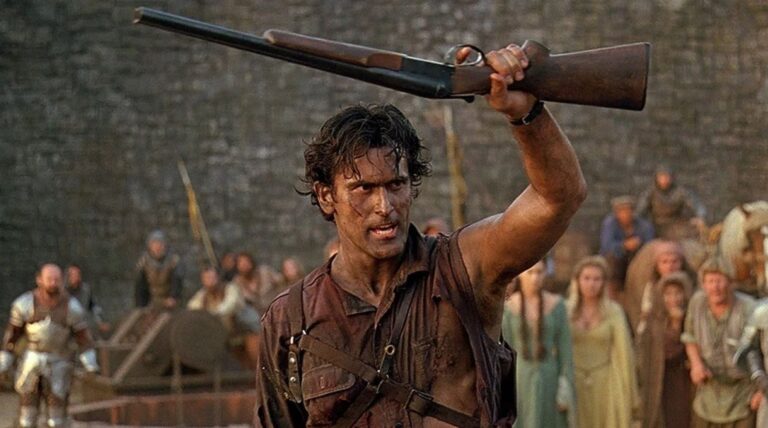 The Mortal Kombat franchise has never been shy about introducing crossover characters. With a roster that includes The Terminator, Predator, Leatherface and Spawn the gorefest fighter that is Mortal Kombat 11 would seem a place where none other than Ash Williams could find a warm welcome.

And even though there has been no official announcement, there are serious hints at him becoming part of the game in the footer of a recent email that Warner Bros have sent out to their mailing list.

The email, which was intended to inform players of the release of the Spawn character also mentions an “ASH” character from “ARMY OF DARKNESS” and attributes the license to Metro-Goldwyn-Mayer Studios who are the production company behind the Army Of Darkness film.

Ash was also included in the list of data mined characters that fans of the series discovered in April of last year. On top of this, there was another leak concerning Ash becoming part of the Mortal Kombat roster back in June which was revealed when gamers typed in “Mortal Kombat Ash Williams” into Google and saw an official advertisement for the character’s release. When the ad was clicked on it simply went to the MK website, however.

All of these supposedly leaked hints pointed strongly towards Ash appearing in the game, but were then negated by the fact that Bruce Campbell himself squashed any kind of rumors that his character would become part of the MK franchise. You can see the tweet below.

Some sources speculate that because Campbell emphasized that it was Evil Dead’s Ash that will not be appearing in MK11 that there may be some chance of another iteration of the character turning up.

We definitely think with all of these clues pointing towards Ash making an appearance, Warner Bros are either trying a little too hard to keep the secret buried, or are employing some kind of marketing tactic to pique everyone’s interest. In either case, we think that Ash Williams would definitely make a fantastic addition to the franchise!