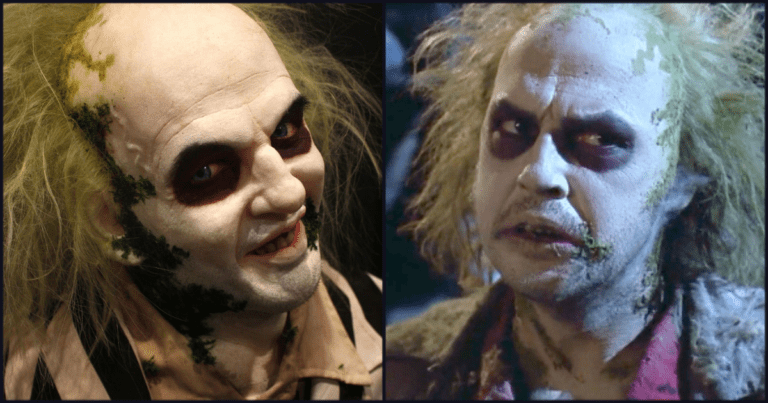 Tim Burton is an Oscar-nominated producer and director known for his work on some of the most unusually entertaining movies out there, but none more so than Beetlejuice.

Despite releasing over 30-years ago, the 1988 horror-comedy is still one of the best in its genre and is frequently referenced in movies and television shows until this day.

Understandably, due to its popularity, the iconic movie has no shortage of merchandise, and fans have the opportunity to enjoy playing Beetlejuice Monopoly or add Beetlejuice inspired lamps to their horror-themed bedroom, and now, they even have a chance of having their very own life-sized Beetlejuice sculpture to keep them company.

The bust incredibly catches the essence of Michael Keaton’s portrayal of the Beetlejuice (or Betelgeuse) character, and everything from his slowly rotting teeth to vibrant blue eyes is on show in this outstanding piece of art.

This has been made available by Monsters4Sale on Etsy, and if you decide to get one for yourself or somebody you know, the hauntingly realistic nature of the sculpture is sure to startle those who come into contact with it.

If you’re interested, you can head over to Etsy, HERE, where the exclusive life-sized Beetlejuice head can be bought.

While the artwork is unbelievable and a must-have for any Tim Burton fan, the product’s price of $1,200 may be a stumbling block, which remains highly unfortunate.

That being said, fantastic artwork doesn’t come cheap, and this is up there with the best of them.

Beetlejuice rose to fame in 1988 when the movie hit theatres. The film follows the spirits of a deceased couple who are being harassed by a family who has recently moved into their home. To solve this, they hire a spiteful spirit to drive them out.

Will you be adding this Beetlejuice head statue to your collection? Be sure to let us know your thoughts in the comments.