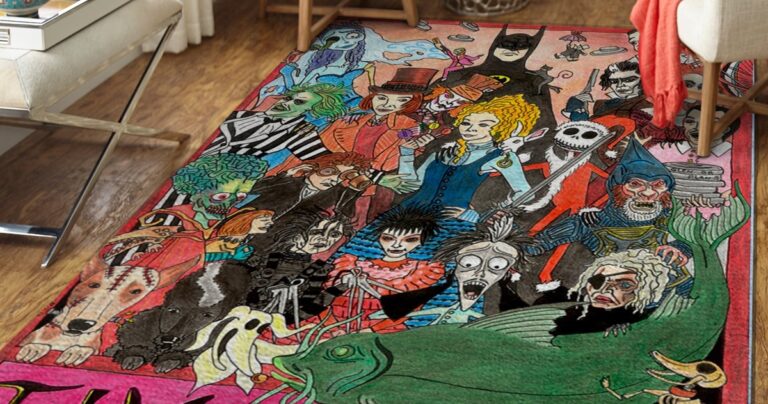 Ever since the likes of The Nightmare Before Christmas, Tim Burton has made a special place for himself in most people’s hearts. Through beautifully-crafted characters and storytelling, the movies that he’s created have given the majority of film-goers memories that will last a lifetime. From Jack Skellington to Beetlejuice and Edward Scissorhands, the director’s characters are looked back on fondly.

As a result, there’s been quite a broad range of the filmmaker’s memorabilia released over the decades, some being official, while others are not-so-official. However, that hasn’t stopped Burton fans from purchasing the merchandise in droves. One of the more recent of these pieces of merch is this Tim Burton character rug, which shows off some of the director’s most famous characters.

Being custom-made to order, the rug can come in a range of sizes and features the majority of the filmmaker’s most famous creations in a wealth of poses. Each of the rugs are also made from plush velour and created using a premium heat dye sublimation, which should mean that they’re high-quality and that the color will last quite a while.

The material is also stain-resistant, so cleaning it shouldn’t be too much of a problem. If you’re worried about the thickness of the rug, then you shouldn’t be; instead, they come in a thickness of .4 inches, which means that they should fit under most pieces of furniture while also feeling great under the sole.

The Tim Burton character rug is available on EurekaUnicorn.com, and are currently on a discounted price of $39.99, down from the typical price of $80, plus shipping costs. Alongside this, there’s only a limited number of them available. As such, fans of the characters might want to buy quickly. However, it’s worth noting that it could take between 14 and 30 days for the rugs to arrive, depending on where you live.