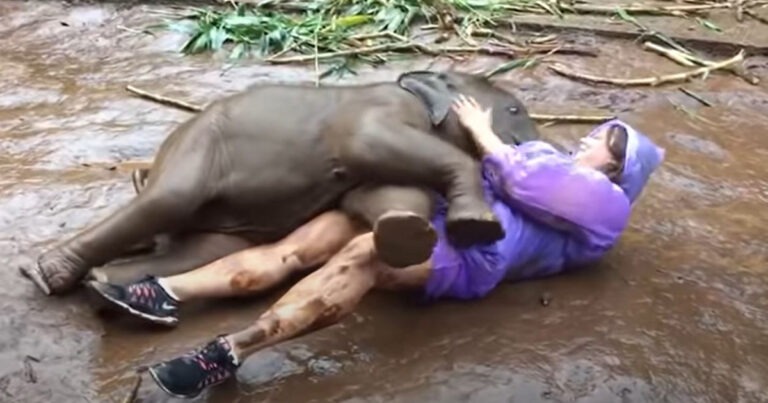 Elephants are one of the few animals that are adorable but can kill a person just by sitting on them. With their terrifying size, it shouldn’t be surprising that they could squash someone with ease. However, this hasn’t stopped them from wanting to play around with people. Thankfully, this very rarely goes wrong, especially when it’s a baby elephant doing the playing.

Though their naturally small for their species, the babies can still outweigh the majority of humans. With that size comes a lot of strength, which they occasionally forget about. Despite this, they have no problem when it comes to getting cuddles off of people when they want to.

As the video below from the Patara Elephant Farm in Chiang Mai, Thailand, highlights, they often get cuddled whenever they want to. The video shows a baby elephant knock over a visitor in the mud so that the elephant can cuddle her. It didn’t hurt that the visitor, named Hannah Frenchick, was already sitting on the floor when the elephant knocked her over.

While many people may be terrified to be in such a position, Ms. Frenchick seemed to be enjoying it just as much as the elephant. Whether or not this is because of how good of a cuddler the elephant is still remains unclear. Regardless, the animal doesn’t show any ill intentions towards the woman.

Instead, it comes across almost like a dog who just wants a bit of attention. That attention just so happened to include a lot of muddy cuddles. Thankfully, Ms. Frenchick happened to be wearing a plastic purple raincoat, so her actual clothes shouldn’t have gotten too dirty during the encounter.

Regardless, the fact that she got to cuddle a baby elephant in the mud is a memory she should never forget. Everyone else gets to be jealous when watching the footage.