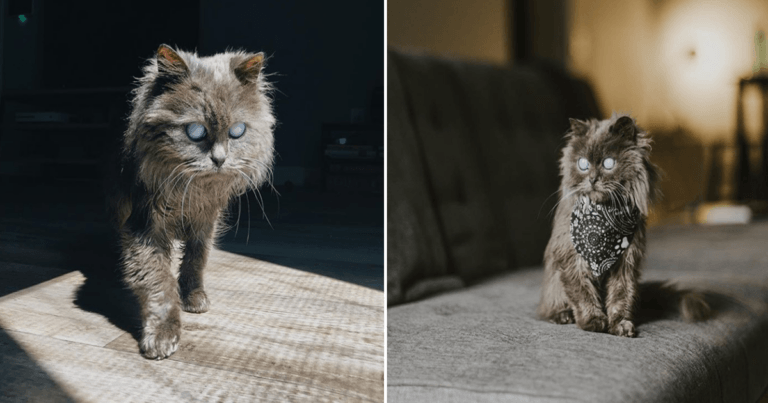 When it comes to cats who start their own online trends, they come in all shapes and sizes. From the musically talented to the downright dreadful cats have always been big hits when their time to shine comes around, and this tiny bundle of fur is certainly no exception.

Merlin is a Munchkin/Persian mix that is almost completely blind. His affliction gives his eyes a mystical milky hue, but that doesn’t stop him from being incredibly social and loving. According to one of Merlin’s owners Elliot Green, the minuscule fluffball loves to go on walks and meet new friends and is often seen sitting on the dashboard of his car.

When owners Elliot and Nathanial Green came to the Lynchburg Humane Society back in 2017 for ‘Free Cat Friday’ the weren’t expecting anything quite as unique as Merlin. When they were being shown around the animal shelter, Green recalls that the woman who was leading them “took us to the medical wing to show us this tiny kitten who was recovering from a head cold” and when learning that the cat was, in fact, blind they were slightly discouraged.

Even though they were apprehensive about the extra care that they would need to provide for little Merlin, Green said that “As soon as I got to hold him, I think it was pretty obvious that he was perfect”.

Merlin is also extra special in what foods he seems to enjoy. He doesn’t eat either chicken or fish but instead tends to get stuck into some watermelon. “Merlin loves watermelon, and since it’s Elliot’s favorite food, he gets it often” recounts Green, and has since nicknamed the picky cat ‘WaterMerlin’.

Even though Merlin has amassed a following of over 110k followers on Instagram, his owners didn’t even intend for him to become a viral sensation, saying that “We just started accumulating a lot of pictures on our phones and decided to share them with the world”

If you want to check out more of this mystical moggy, don’t forget to head over to his instagram @merlin.griffith.