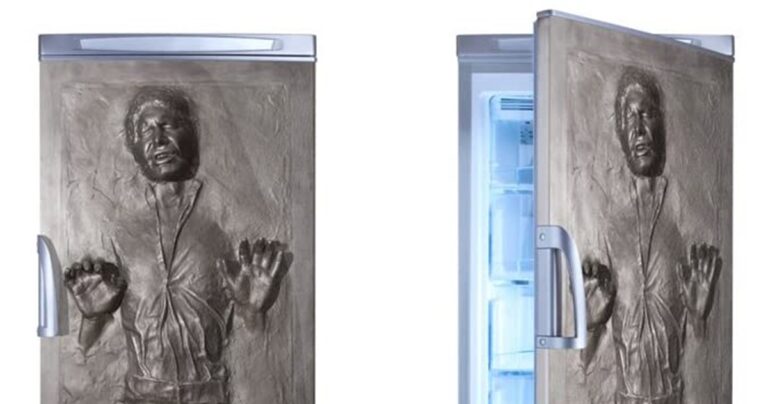 The Star Wars franchise has a wealth of iconic moments, with many of these coming from the original trilogy. However, there are few scenes that are as memorable as seeing Han Solo being frozen in carbonite and taken prisoner. Originally written as Harrison Ford wanted a way out of the films, the character was subsequently unfrozen in the following film, much to many fans’ delight.

Despite coming back from the (almost) dead, the image of the character as he became a frozen tablet has become one of the franchise’s best scenes. As a result, there’s been quite a broad range of merchandise based on the image alone. Everything from toys to mugs and t-shirts, little hasn’t been plastered with the image.

However, kitchen appliances haven’t seemed to have gotten this treatment. That is, until now. Developed by Vinyl Revolution, this FridgeWrap turns your refrigerator into an almost three-dimensional version of Han Solo, post-carbonization. Standing at 65 cm wide x 180 cm high (or 25.35 inches x 70.2 inches), the wrap should fit the majority of fridges.

For those that may be a little smaller, there should be enough room around the edges to shorten and thin the wrap, depending on your needs. The wrap itself is also made from outdoor sign vinyl, which should make it resistant to scratches, as well as the daily wear and tear that your fridge might go through.

The wrap is also water and oil-resistant, so there shouldn’t be any staining or damage unless you decide to come at it with a blaster or lightsaber. According to Vinyl Revolution, the material also makes it easy to clean in case any dirt or water happens to get on it.

The Han Solo in Carbonite FridgeWrap is available on Amazon and is priced at $50, plus $3.99 for shipping.