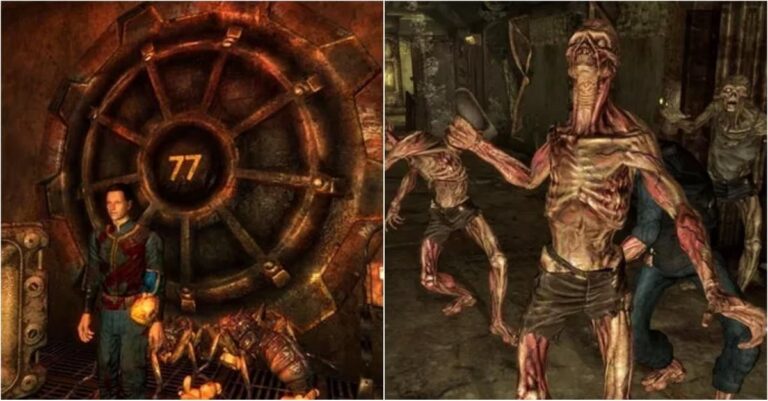 The “Fallout” series is packed with horrifying vaults which make up for wild and gripping games. But, how many of those vaults’ terrifying origins are you aware of? Showcasing some of the weirdest vaults in Fallout, this list of 12 vault backstories even includes original titles alongside Fallout New Vegas and Fallout 3. For those of you who are not aware of the dynamics of the game, the vaults are pretty much a staple in the series. People sealed themselves in vaults when the nuclear apocalypse was nigh as they hoped to continue humanity. However, that was not all that took place. Vault-Tec used the vaults as their own laboratory to conduct disturbing experiments on people which eventually lead to disastrous effects.

Vault 11 has a series of disturbing recordings released. One of them shows the election of an Overseer who sacrificed themselves to the Vault so the others could stay alive. However, soon after a war erupted in the vault leaving behind only five survivors. They reached the conclusion that choosing no one to die would mean everyone has been let go. So the survivors decide to commit suicide – all except for one.

Penny Arcades’ Mike Krahulik and Jerry Holkins wrote up and drew this vault and it might just be the scariest one of all. One man was locked into the vault with nothing else other than a crate of puppets. His descent into insanity is no shocker.

Ten days after the vault was sealing in Capital Wasteland, psychoactive drugs were released into the air. The inhabitants were unaware of it and the adverse effects they experienced were blamed on the filtration system. Some went insane, some experienced relaxation and most of them died. Many of those who entered the vaults succumbed to hallucinations which drove them insane to the point of killing others.

The first experiment in this vault was unsuccessful and it was followed by one that was designed to look into the Forced Evolutionary Virus – to create humans capable of adapting to the nuclear wasteland. This resulted in mutants who broke out and forcefully mutating others – by dipping them into the virus. They did this so as to continue their own species.

Vault 68 had one thousand inhabitants but only a single woman. It was probably one of the most sadistic of experiments. Although the results of the experiment are unknown, you can rely on your imagination to decipher what transpired.

Stanislaus Braun’s vault is one that has a plethora of VR pods which allow people to live in virtual utopia. Braun being a sadist, used the inhabitants as playthings and tortured them for years.

An Overseer guaranteed death in 40 years, almost all positions filled, excessive weaponry and no entertainment – all these factors made Gary’s Vault one of the weirdest ones out there. The inhabitants embarked on their own cloning experiment. A dweller called Gary had 54 of his clones made. The Garies ended up being hostile to anyone who was not a Gary and killed them all.

Vault 92 was untruly believed to protect the arts and was full of musicians and artists. In truth, a white-noise experiment was carried out to turn the dwellers into super soldiers. The experiment successfully transformed the inhabitants but they all went insane and killed everyone.

Recreational facilities and overstocked weapons took up the majority of the space and caused the vault to became overpopulated. Once the Boomers left to Nellis AFB, a radiation leakage occurred turning everyone into ghouls. While some are still alive, others have turned into exploding glowing ghouls and feral ones.

Plants were experimented with in wild forms. What they didn’t know was that the plants were sentient and hostile. The plants ended up killing everyone.

An important vault in the original “Fallout”, this one was large enough to accommodate over a thousand people. The vault’s doors were intentionally kept slightly open, allowing others to come in and overpopulate the place. Then radioactive gasses were leaked in turning everyone into ghouls and ultimately creating the creepy Necropolis.

Hopelessly naïve and optimistic as the inhabitants were, this enabled the Fiends to con their way in. Every vault inhabitant was murdered and the Fiends made the vault their base against the NCR. The vault still swims in its inhabitants’ blood.

This vault was designed to eventually break down. Everything was set up to fail. People ended up dying because of the rising levels of stress and the diminishing functional medical equipment.

Each of these vaults has its own horrifying tale that is equally hard to digest. From Vault 12, that created the scourge of ghouls, to Vault 3 which was a tale of tragedy, the vaults of the Fallout games are stupefying. The scariest one of all can easily be Vault 11.