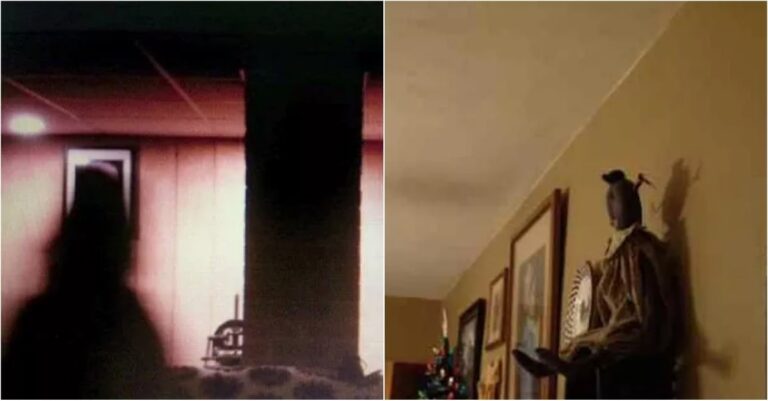 Although ghost videos are abundant on the internet, it is rather hard to actually catch a ghost on film. However, when a news crew visited a house in Hanover, Pennsylvania in July 2014, they captured footage of a haunting. DeAnna Simpson contacted the crew after having lived in the haunted house for years and stated that she would either be forced to sell the place for a huge loss or continue living there. At first the crew was skeptical, but what they found will stun you.

Footage of Shadowy Figures Was Caught And The Crew Was Scratched

Fox 43’s Katie Kyros took her crew in July 2014 to DeAnna Simpson’s home in Hanover. They initially intended on interviewing Simpson regards the activity she experienced. But, then they experienced it as well.

Only a few minutes into the interview, Nick Petrillo, the photographer for the crew, felt his wrist burning and a scratch appeared out of nowhere. Moments later, Simpson took a photo of the basement and in the picture a shadowy hand and a strange orb appear.

The Experience Made The Skeptical Crew Believe In The Haunting

DeAnna Simpson believed that the entities attacked the crew so as to hamper the story from being told. However, on the contrary, the story became viral.

Nick Petrillo said, “I was very skeptical until this.”

Katy Kyros also said, “I didn’t think anything would happen in this home… there were things we can’t explain that happened there.”

The Haunting Started Once The Simpsons Moved In

In 2007, DeAnna Simpson, her husband, and their daughter moved into the Hanover home. Prior to purchasing the house, Simpson did notice orbs showing up in photographs she took of the interior. She brushed it off to be dust motes.

Once they moved in, almost immediately, her pictures started showing a “shadow man.” This was followed by footstep sounds, howling, strange noises at night and babies crying. Physical harm even began once the family started feeling scratches and bites.

Once she moved in, DeAnna Simpson says she began having awful nightmares. The dreams were far more vivid when she slept in the attic which she had converted into a bedroom:

“I would have dreams of these two men approaching me, trying to talk to me. It happened so many times. One night, I felt my hair touched, and when I opened my eyes there were the two men at the side of the bed. They looked at me with such hatred and such scorn, like they were saying, ‘Get out of my house. What the hell are you doing here?'”

DeAnna asked around and discovered that the men in her dreams were actually the previous owners of the house.

A Shadow Man Appeared In The Basement

The Simpsons claim to have seen the entity that possesses the house. Photographs of the basement clearly show an almost seven-foot-tall “shadow man.” DeAnna says that he has physically held her down multiple times. When speaking to an interviewer she said, “When it came on me I couldn’t breathe. I couldn’t scream. I couldn’t move.”

She was attacked and scratched. The mark left behind formed the letter “M.” After the attack she dreamt of the shadow man standing at the foot of her bed saying, “My name is Mastema. Your Yahweh cannot help you now. I’ve been given the permission to roam the earth with 10 others.”

DeAnna Simpson Was Shoved Down The Stairs

DeAnna states that the master bedroom is where the majority of paranormal activity takes places. She and her husband used to sleep there until she was pushed down the stairs by an invisible force. After hitting the wall and landing on the floor, she attempted to sit up but failed as she felt something was sitting on top of her.

She then switched to using the spare bedroom and then the activity decreased. She woke up often to the apparition of a woman stroking her hair.

The family’s cats were heard emitting strange noises one night. Upon investigating, Tom and DeAnna saw black mist oozing out of the walls and dissipating around the house. It had a foul odor and then it eventually vanished through the ceiling, leaving behind a black mark that couldn’t even be painted over.

When speaking to the The Dead Files Tom said at times he can still smell the mist, which was a mix of “urine, fecal odors, and kerosene.” Amy Allan, who is the show’s medium, also confirmed the rancid odor in the house.

Even The Dead Files Crew Found The House Terrifying

When the Travel Channel show The Dead Files first heard of the Simpson home, they immediately sent over their crew to investigate. They heard the Simpsons’ stories and even walked through the house themselves. The experts of the show ultimately concluded that the place was breeding ground for negative paranormal energy. Amy Allan said that at one point she felt like the presence would attack her.

A Medium Believes The Shadow Man Was Alive At One Point

Amy Allan states that the shadow man had it in him to hurt every woman who stepped onto the premises. As she walked through the house she felt a strong evil vibe and heard things like, “You’re mine, you can’t escape.”

While speaking to the camera, Allan said, “I feel like he comes up from the grave. He was a living person once. It’s very creepy.”

The Property Has A Bloody History

DeAnna Simpson shared some of the bloody history of the house with “The Dead Files”. She said the house used to be a site for “animal killing, Oujia board playing, [and] child murder.”

Steve DiSchiavi, a former NYPD homicide detective, worked with “The Dead Files” to dig up some history of the property. He discovered that at one point a young girl drowned in the house. He also found that in 1752, the original owner sent his sons to take care of a man who owed him money in the matter of the house’s property dispute. One of his sons ended up being shot in the face and then died.

The Simpsons Are Attempting To Sell The House

DeAnna Simpson no longer wished to live in the haunted abode. At first she said she was not going to allow anything to scare her out of her own home. However, later she said that her family has been trying to leave the house since 2010 but that would incur a loss of $40,000. For now, they are still residing in the Hanover house.

The creepy ghost recordings collected from the Hanover house of the Simpsons is enough to prove that life after death indeed exists. Given the fact that a real crew captured these video and not a novice with a camera, it is safe to say that these are legitimate proof of supernatural activity.