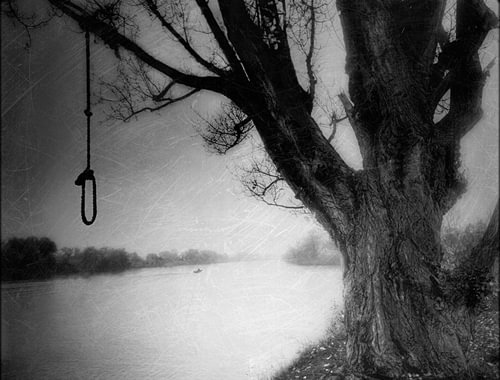 Halloween is that part of the year that everything creepy and downright horrifying is considered awesome. How cool is it to walk down the block and see a bloody body hanging from the tree? It is all fun and games until someone takes it one notch higher and used an actual dead body. On this disturbing list of dead bodies used as Halloween decorations, you will stumble upon twisted tales of individuals with a lewd sense of humor.

This is definitely a thing for those who are not faint of heart and you might just end up skipping dinner tonight. These real human beings’ bodies were either used purposefully as Halloween props or may have accidentally been considered one. Either way, as you go further down the list the true horrific nature of these acts will set in. Enjoy the read and don’t forget to switch the lights off.

A Halloween prop resembling a corpse was spotted by Ohio residents hanging on a fence. However, many people were shocked by the realistic appearance and choose to report it to the police. Upon investigating the scene, it turned out that the body was actually the dead body of Rebecca Cade. The 31-year old local was a drunk who was loved by everyone in the community. A bloodied rock was found near the fence. It was presumed to be the murder weapon. Police are currently investigating Donnie Cocheneour in relation to the murder. Talk about dead bodies used as Halloween decorations!

They say that the Universe has its way to grant you with all the good things in life. But what happens when you rebel against the natural order? Chaos ensues. In Sparta, MI, a young 14-year old boy was gripped by the world of horror. Around Halloween time he insisted on getting a job at the local farmhouse’s haunted hayride. Although the proprietor stated that all the vacancies were full, the boy begged him and his mother to allow him to work at the site, even without pay.

He ended up getting the post of being locked in a coffin to scare people. However, the kid decided the task was not good enough for him and switched it with another worker at the noose show. The display involved a plastic skeleton hung from the noose. Once again, the youngster figured that the display was not good enough and ended up removing the skeleton and placing the noose around his own neck. The noose cinched and strangled him right there. While flailing and attempting to break free a group of patrons spotted him. They mistook the child for a good horror show and passed by, leaving the body grow limp in the tightening noose.

In 2005, in an obvious attempt at suicide, a 42-year old woman hung herself from a tall tree. The wee hours of the morning and the proximity of Halloween led passersby to assume that it was a fantastic show for the upcoming creepy holiday. It was not until later that day that residents of Frederica, DE realized that the hanging body was actually that of a human. The clever display is one of the many tales of dead bodies used as Halloween decorations emerging around October.

In 2009, the porch of Mostafa Mahmoud Zayed displayed a corpse around Halloween time. The neighbors thought it was a magnificent idea for a Halloween prop. Everyone was stunned at the authenticity of the display and did not think much of it. By the fourth day, an elderly passerby did not buy the prop story and suspected something was off about how authentic the corpse looked. Seeing how no one actually bothered to ring up Mostafa Mahmoud Zayed’s doorbell to check up on him or even ask where he purchased the prop, no one could tell that it was indeed their dead neighbor’s body. When reported to the police, it was discovered that Zayed was dead and rotting on his own porch with a gunshot wound to the head, lodged in his eye socket

The real story behind the curse of the Poltergeist in the franchise arises from a far more sinister reason than one can behold. It is not a fable that multiple actors from the film series died shortly after filming. In 1982, Dominique Dunne was the first to die after the release of Poltergeist. She was strangled to death by none other than her ex-boyfriend.

In 1985 another great actor from the set passed away from stomach cancer. Julian Beck who played the bad spirit in Poltergeist II was the second to die. The Good Spirit, Will Sampson, passed away right after in 1987 from a failed heart-lung transplant. Even 12-year old Heather O’Rourke who made appearances in all three films died. She passed away from cardiac arrest following a septic infection that caused bowel blockage.

The reason behind all these mystery deaths later surfaced. Word got out that real dead bodies were used as Halloween decorations on set. Dead people’s bones were used to add a realistic touch to the act. In one of the scenes, Will Samson, even performed rituals to excite the spirits of the dead bodies. The wicked part is that none of the actors had any idea that the props were real.

One would think they live in a safe neighborhood until sightings of real dead bodies used as Halloween decorations arise. Incidents like these could scar you for life – or excite you tremendously. We all have a hidden mad man living within ourselves and it is okay to let it out from time to time. By the time you are done with this list, you should be advised to keep your eyes peeled for an instance of dead bodies used as Halloween decorations.