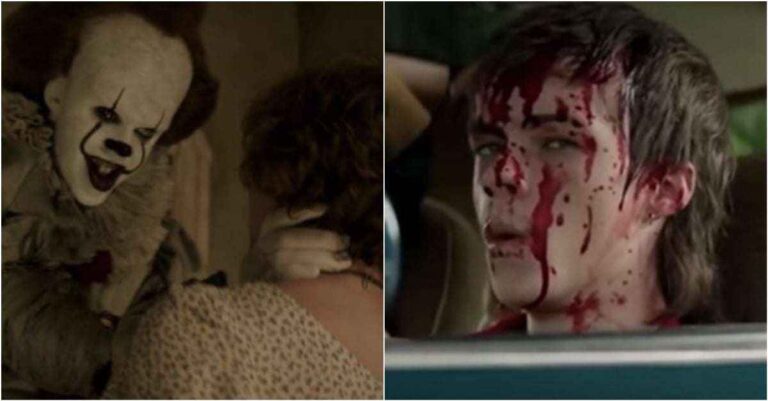 By the end of 2017, people started to go through the movies released in the year and come up with exactly which one stood on top. And without fail, almost everyone was talking about the adaptation of Stephen King’s IT, the horror phenomenon which blew everyone’s minds. Speaking for myself, I felt like the fun I had watching Pennywise-fronted 80s nostalgia was unparalleled.

But since the film came out, fans of the IT have been demanding more and more IT related clips and any updates on the sequel, many even have been searching for extended clips. For now, possibly the best extras of it we’ve had has just come out – showing Henry Bowers stalking the Losers Club. But there’s more – in the car, are his best friends, Belch and Victor, sat with their throats slit – a scene that you will not see in the cinema release.

The car is painted with blood on the inside and focuses attention on Bowers’ insanity by the fact he is still conversing with his two mates who he mercilessly butchered like animals. The clip has now been taken down on copyright claims, but it just goes to show how much Pennywise has twisted the mind of the guy- making him sit in the car with the dead bodies of his mates before he diverts his attention to the Losers Club.

In spite of being seriously ghastly, it’s not the only scene removed from the final cut, because the creators of the film edited out yet another scene they regarded as ‘too disturbing’ for the final release.

Earlier in September, rumors surfaced there was a deleted scene that never made it to the screens, but Bill Skarsgard sure did entice the fans with the following description of how it went down:

There was a scene we shot that was a flashback from the 1600s, before Pennywise [was Pennywise].

The scene turned out really, really disturbing. And I’m not the clown. I look more like myself. It’s very disturbing, and a sort of a backstory for what It is, or where Pennywise came from.

That might be something worth exploring in the second one? The idea is the It entity was dormant for thousands and thousands of years.

The [flashback] hints on that.

Thankfully though, part of the script as released which had everyone busy with theories and speculations for weeks on.

She’s shaking, doesn’t want to let go. Behind her, the Door OPENS. A Little Boy, 6, asks — BOY: Mama? ABIGAIL: NO! OUT! NOW! Frightened by his mother, the Boy runs.

Abigail turns back to Pennywise. Wherever he may be now in the room. The light somehow seems to spin faster now. She kisses her baby and sets it down. It BAWLS. ABIGAIL: I’m sorry, I’m so sorry…

It continues on to read:

She turns away from the baby. Faces those dying embers. We keep on her face as they seem to begin GLOWING BRIGHTER AS — OVER HER SHOULDER — OUT OF FOCUS — Pennywise crawls over to the Baby and starts to feast.

SHARP CRY FROM THE BABY CUT OFF as we hear a CRUNCH. Abigail continues to look into the BRIGHT ORANGE GLOW of not the flickering fire… but the DEADLIGHTS. Her expression changing. Fear. Denial. Grief. Acceptance. And then nothing. Just a glazed look.

Man, if we get to see the extended cut… nothing could be better.