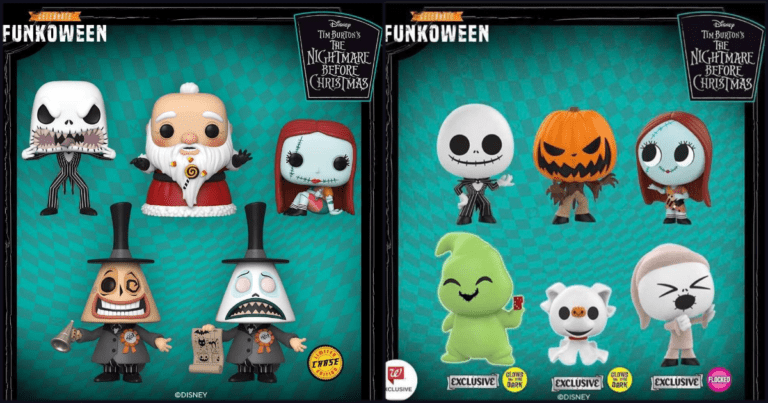 Funko has released a collection of Pop! figures for their Funkoween in May event, and alongside iconic movie characters like Chucky from the Child’s Play series, The clowns from Killer Klowns From Outer Space, and Wichita, Tallahassee, and Columbus from the Zombieland films, we now have the addition of a handful of The Nightmare Before Christmas cast.

The May event began with the release of a Creepy Mickey Mouse, and a Witch version of Minnie Mouse, which, of course, later expanded to what it is today.

Funko has been launching wave after wave of popular horror characters, and joining the list of terror for Funkoween is a large portion of our most beloved animated friends from The Nightmare Before Christmas, and you can find them below!

Character designs vary, but these spooky ones are guaranteed to add a scare to your haunting collection.

If this terrifying side to the collection doesn’t interest you, maybe these hauntingly cute ones will.

I mean, who can resist this incredibly adorable pop figure of Zero?

More creepy designs were announced and can be found below.

The new Halloween-themed pop figures have been announced in between May 18 and May 22, and are available for pre-order now.

If you’re interested in getting your hands on one of the many variations of Jack Skellington, his adorable sidekick dog, Zero, or any other pop figure you see above, make sure to go over to Funko, HERE!

The Nightmare Before Christmas first rose to fame when it was released back in 1993. It follows Jack Skellington, king of Halloween Town, as he discovers Christmas Town and attempts to bring Christmas back to his home, causing confusion.

Will you be adding one of these pop figures to your collection? Be sure to let us know which one interests you in the comments.