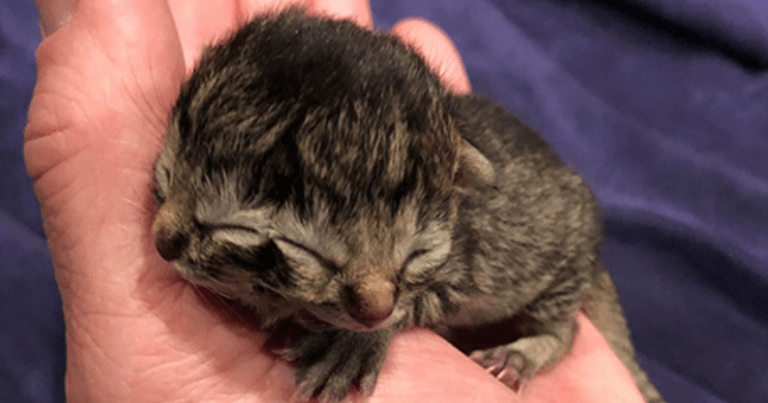 The best things in the world are sometimes discovered in the most unlikely place and time.

It was a regular Wednesday morning when Kyla King discovered that her pregnant house cat has already given birth.

She found six beautiful kittens, but she was surprised and amused to see the last one having very distinct facial features: it has four eyes, two small noses, and two mouths.

Kyla quickly took her mobile phone and sent a picture of her discovery to her husband BJ with the text: “We have six and one-third kitty cats now!”

Of course, the King family reached out to their local veterinarian to find out if their two-faced kitten is something to be worried about. She also consulted how to regularly care for it and survival rate.

Kyla was relieved when she learned that their rare kitten does not require heavy medical attention or maintenance. The best way she can treat it, which she named Biscuits and Gravy, was to make it feel comfortable and support them in their daily eating since the kitten does not know how to properly nurse itself.

Cats like Biscuits and Gravy who have two faces are known as “Janus” cats, named after the Roman God Janus who was often visualized with two faces in mythology. Their condition is called disprosopus, also known as “cranial duplication.”

Unfortunately, a lot of Janus cats don’t live longer than one day. Here’s hoping Biscuits and Gravy will prove everyone wrong.

Currently, Biscuits and Gravy are doing well but the King family is working very hard to ensure their safety.

What are your thoughts on this two-faced kitten from Portland, Oregon? Share your reactions in the comments section below.