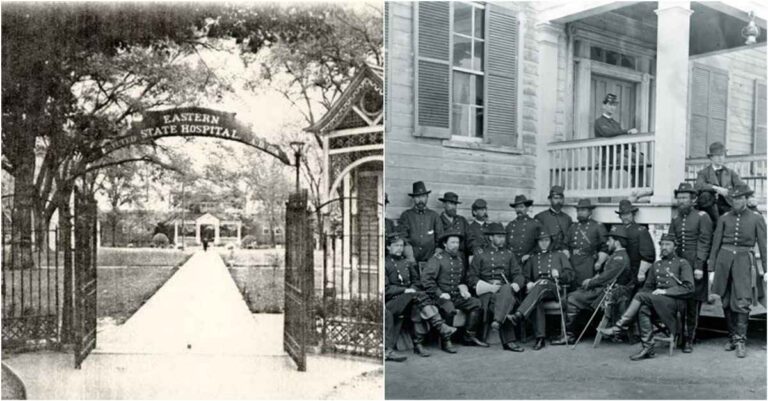 The first insane asylum in the United States opened up on October 12, 1773. It was called the “Publick Hospital” and was situated in Williamsburg, Virginia. The hospital was established “for the support and maintenance of Ideots, Lunaticks, and Other Persons of Unsound Minds” who were regarded as a threat to society.

In reality, there was little to no support offered to those admitted. Prior to the hospital’s establishment, mentally challenged individuals were judged by a jury which determined whether they were lunatics, idiots or criminals.

In the 18th century, not much was known about mental disorders. Most ailments were attributed to moral failures or conscious decisions by the sufferer. In other words, irresponsible was the term addressed to insane individuals. Eventually, two legitimate diagnoses were recognized: melancholia and mania. By modern standards, the treatments applied were cruel and gruesome.

First, the patients were given strong drugs to “evacuate” their bodies which ultimately led to diarrhea and vomiting. Straitjackets and manacles were largely used for restraint. The drugs were followed by plunge baths – repeated exposure to icy water which resulted in shock. It was sometimes referred to as the “bath of surprise.” It was believed that the shock treatment would “snap the person out of their lunacy.” At times, the electric machine and scarificators (devices with multiples blades used to “bleed” patients) were used for the shock treatment as well.

The only reprieve allowed to patients was the “mad yard” which was built in 1790. Nine years later, beneath the hospital’s first floor, cells were dug out. They were used to imprison patients found in a “state of raving phrenzy.” Basically, the asylum existed to shun the mentally unfit population from the rest of society.

By the mid-19th century, conditions improved. Patients were allowed to visit the town during the day. However, the good days did not last for long. After 20 years, following the Civil War, the asylum returned to its darker practices.

An electrical fire that took place on June 7, 1885, burned the asylum to the ground. The hospital was rebuilt and renamed “Eastern State Hospital.”

Despite the renovation, the ghosts of the asylum remained. Dr. John Galt is one of the more famous spirits of the place. In 1841, Dr. Galt was the superintendent at the facility. He was one of the first to be distraught over the treatment of patients and pushed for reform. Following the devastating Civil War, the hospital fell under the control of the Union Army. Most of the patients were neglected. When Dr. Galt saw these conditions, he became deeply depressed and overdosed on Laudanum. The blood vessels in his head ruptured due to the high dosage and he was found dead in a pool of blood.

It is said that Dr. Galt’s ghost roams the hospital’s grounds at night time. Visitors have heard muffled voices and knocking on walls. Once, a maintenance workers witnessed the shadow of a wheelchair.

The Colonial Williamsburg Foundation reconstructed the original hospital in 1985. Currently, it is a small museum, with six patient cells modeled after the first iterations. Eastern State Hospital, was relocated to a new spot outside of Williamsburg and it remains an active psychiatric hospital. It has over 300 beds and 900 staff members.