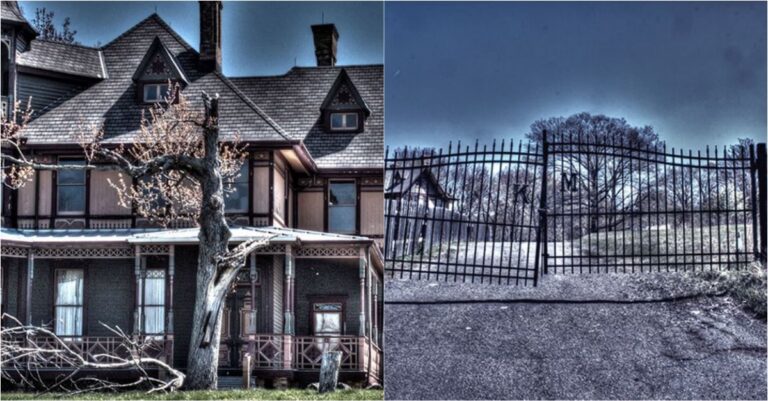 Although currently on the market for sale, it has been several years that Staten Island’s Kreischer Mansion has not seen permanent residents. A lot of people believe that this is largely due to the fact that the mansion is haunted. In 1894, the original owner of the house, businessman Edward B. Kreischer, shot himself in the head. More than 100 years later, a man named Robert McKelvey was murdered in the house.

Kreischer Mansion is located on Staten Island in New York. Originally, another mansion, mirroring the structure, resided beside it. Balthasar Kreischer who earned a fortune by fabricating and selling fireproof bricks built both the mansions. In 1885, construction was completed. Shortly after, Balthasar’s two sons—Charles and Edward—moved into the lavish mansions. One year later, Balthasar died and with his death the brick business fell to ruins. In 1894, an argument at the factory led to Balthasar’s son Edward committing suicide.

More ill-fate fell upon the family when Charles Kreischer’s mansion was destroyed during the Great Depression. Edward’s mansion still stands today but is abandoned. The only visitors of the estate are caretakers and frequent paranormal entities. Despite being on the market for years, it has not seen any success.

What with the mansion’s repute being bleak, one of the caretakers used the abandoned abode to commit a murder! The Bonnano family hired Joseph “Joe Black” Young in April 2005, to get rid of Robert McKelvey who owed money to Gino Galestro, the Bonnano patriarch.

Joe Black and three other men got their hands on McKelvey and used the abandoned mansion to kill him. They stabbed him with a knife but McKelvey bolted for the door. The other men attempted to stop him and grabbed and strangled him. However, he did not die, yet. Eventually the four men took McKelvey to a shallow pool in the front yard and drowned him. His corpse was then transported to the basement, cut it into small pieces, and disposed of into a coal-burning furnace.

The FBI took a full year until they were able to fully investigate the murder. By then the furnace in the basement had been removed but there was enough evidence to sentence Joe Black in 2008 to life in prison. In 2009, Galestro received a 20-years sentence for ordering the hit.

Today the Kreischer Mansion is a stark reminder of over a century’s life and death of New York stories. Some people say that Edward Kreischer’s distraught wife haunts the hallways while others speak of a German cook who was killed in the home and still bangs pots and pans in the kitchen. Wailing children have also been heard. However, despite his gruesome demise, McKelvey’s ghost has not been spotted yet.

The Kreischer Mansion was visited by Nick Groff’s in Paranormal Lockdown’s final episode of season one on Destination America. Aaron Paul also visited the abode in an episode of Super Into of TruTV.