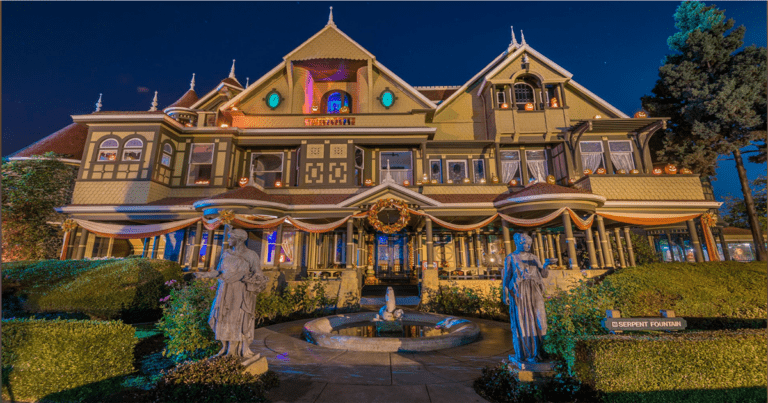 The Winchester mystery house is one of the most well known haunted estates in the US and is said to be plagued by the ghosts of all those killed by Winchester rifles due to the fact that it was once owned and resided in by Sarah Winchester, wife to William Wirt Winchester who was the lifelong treasurer of the Winchester Repeating Rifle Co. The company who now owns the house has just announced a brand new tour which ghosthunters and afterlife aficionados alike and tickets have already gone on sale!

Winchester House opened its doors recently for visitors to experience their ‘Walk With The Spirits’ tour and invited all patrons to “Roam the expansive grounds of the world’s most famous haunted mansion, hear tales of its former and possibly current inhabitants, and peer through the many windows and doors to see what might materialize”.

For those unaware of Winchester House’s illustrious past, it all began in 1886 when Sarah Winchester moved into the San Jose property before starting a 36 year-long renovation spree which cost millions of dollars at the time and only ended when Winchester passed away in 1922. By the time the renovations stopped Winchester House boasted over 160 rooms, including 2 basements and multiple trick doors. It is said that Winchester was so ardent on continuing the build because a psychic has prophesized that to evade the countless dead from Winchester weaponry she would have to continuously add to her home.

The apparent hauntings became so severe that the management company in charge of Winchester house undertook a month-long investigation that involved hundreds of people in the 1990s and multiple films and shows have been created based on the location.

Tickets for the Walk With The Spirits tour are timed to account for social distancing procedures but they appear to be selling out fast so if you’re near San Jose and fancy the trip, let us know about your experiences in the comments!