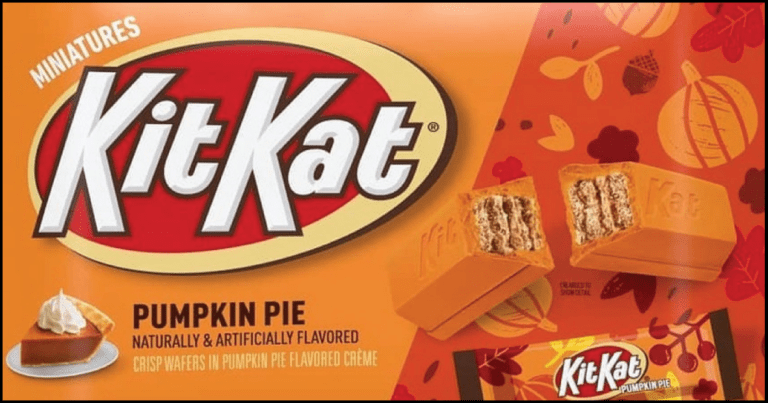 Halloween season and candy are two of the best things this world has to offer, and although the thought of new chocolate treats is irresistible, bringing back old fan favorites is just as tempting.

We have previously reported that Reese’s Franken-Cup’s and Hershey’s Vampire Kisses are set for release later this year, but alongside them is the comeback of the ever-popular, Kit Kat Pumpkin Pie.

Amazingly, you won’t have to wait to treat yourself to Kit Kat’s Pumpkin Pie as they’re currently in stores right now.

For the past two years, there have been very few chocolate bar flavors that compete with the Pumpkin Pie by Kit Kat during the Halloween season, and we expect this year to be no different.

If you’re yet to try these unbelievable treats, we recommend you stock up on them before they eventually sell out.

The Kit Kat flavor is perfect for those of you who want to enjoy Halloween all year round, now you have the chance to stuff your faces with this brilliant candy for three months before the best day of the year is here.

Reported by Best Products, these lovable delights are available for $3.79 and come individually wrapped inside of a 9.7-ounce bag.

In what has been described as “the best Kit Kat ever”, Pumpkin Pie is a must-buy for any Halloween/chocolate lovers.

Despite Kit Kat knocking it out of the park with the return of their pumpkin pie flavor, the iconic candy company is also releasing a Halloween-themed ‘Witch’s Brew’ that is said to taste like marshmallow. Read more about it, HERE!

Are you as excited as us to see the Pumpkin Pie flavor returning for a third (technically fourth) successive year? Will you be stocking up on these wonderful treats as soon as possible? Let us know in the comments below.