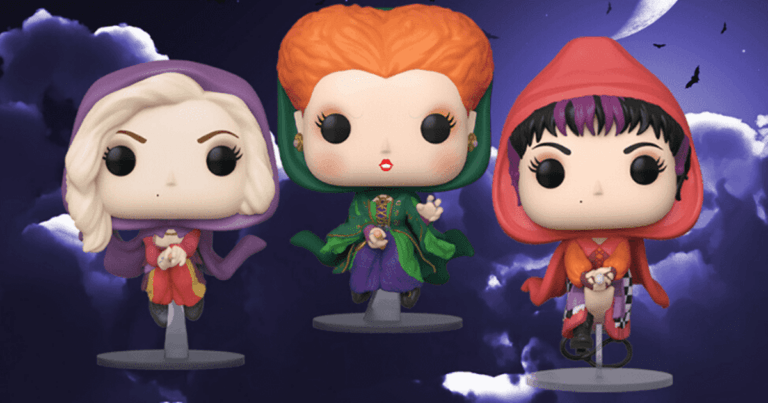 While Funko’s Funkoween in May event has finished, it hasn’t stopped the company from releasing a few other Pops to commemorate the occasion. One of the newest releases focuses on Hocus Pocus and features all three Sanderson Sisters on their brooms. The characters will be available to purchase either as a three-part pack or individually.

The film, released in 1993, became a cult classic immediately after release, gaining countless fans across the globe. It follows the three sisters, who initially died as part of the Salem Witch Trials, as they’re brought back to life following a magical flame being lit. While it wasn’t a commercial success at first, it’s since released a range of merchandise while consistently selling countless videotapes, DVDs, and Blu-Rays.

The Hocus Pocus Funko Pops are available from Entertainment Earth from $10.99, plus shipping. However, it’s unclear as to what the price of the three-pack will be when it’s released, although it’s expected that this will be around the $25 to $30 range, should they be priced to similar Pops.

While they’re available to pre-order, the characters aren’t going to start shipping until some time in September. However, fans might be able to magic away the wait time. At least, they might be able to make it seem like they’re not waiting as long. If you buy them and then forget about them, then they’ll be a nice surprise once they do arrive.

Over the past few weeks, Funko has released quite a broad range of new Pops, with many of these focusing on occult or horror-based movies. In addition, there’s been a few releases focused on Tim Burton-creations, such as The Nightmare Before Christmas and Beetlejuice. There’s also been zombified Marvel characters, Child’s Play characters, and others.

As a result, the new Hocus Pocus release is in quite good company.

Click on the below image to head straight to Entertainment Earth,