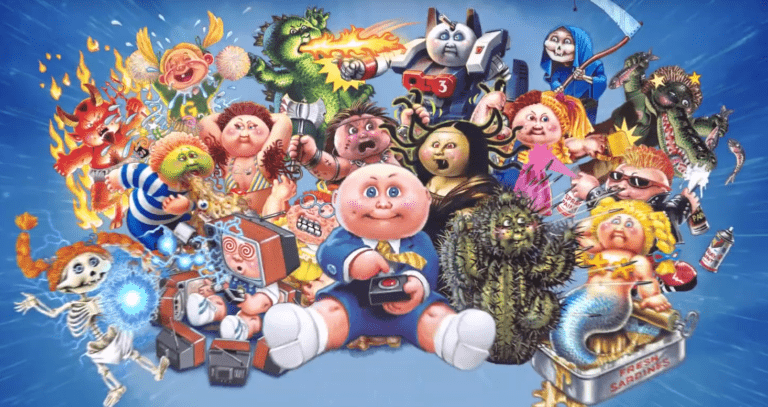 The Garbage Pail Kids have had a controversial and storied upbringing. Starting off as a series of trading card stickers they were designed to parody the popular Cabbage Patch Kids.

The Garbage Pail Kids cards were promptly banned from a lot of schools and creator Topps soon found themselves entering into a Trademark infringement lawsuit with Cabbage Patch Kids creator Coleco. The two companies settled out of court and Topps agreed to change the appearance of the characters and the logo.

The series has seen not only an animated show but also a feature-length film which to this day holds a 0% fresh rating on Rotten Tomatoes. You can check out the trailer for it below if you dare.

With the 35th anniversary of The Garbage Pail Kids coming up shortly, Topps has decided to partner with R.L. Stine to release a series of three books centered around the more popular characters. The description of the series says:

Welcome to the town of Smellville, where nine kids all live in a big tumbledown house and have as much fun as they possibly can. People may think that they’re gross and weird and strange, but they’re not bad kids—they just don’t know any better. In this hilarious new series from bestselling author R. L. Stine, the Garbage Pail Kids—from Adam Bomb to Brainy Janie—get into mischief at their middle school, all while battling bullies and their archenemies, Penny and Parker Perfect. These all-new illustrated stories are sure to amuse, entertain, and blow away readers of all ages. Bonus: includes four exclusive Garbage Pail Kids stickers!

According to Amazon, the book will be available October 6th.