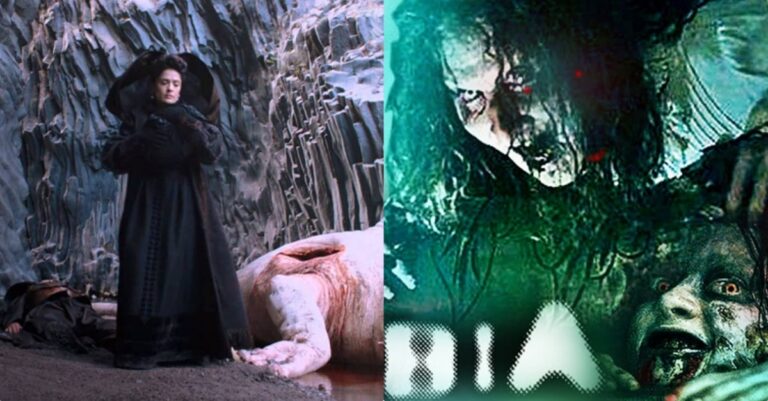 Horror anthologies have maintained a steady repute but as of late there has been a hike in their popularity. AMC even announced news of multiple new anthologies released only the week before. ABCs of Death, the V/H/S series and Southbound are all great examples of horror anthologies’ successes. Despite the fact that most people regard these anthologies as a thing of the past, there is no denying that they have a large following even to this day. The following list of 10 horror anthologies are underrated must-watches that you probably missed out on.

Dead of Night was released in an era when horror films were not in abundance. It is a timeless classic that involves the supernatural, foreseeing the future and creepy tales conjoined together. Without a doubt, the most memorable segment was the eerie Ventriloquist’s Dummy. With a gut punching ending, this film has been the leading inspiration to many recent horror films. The strange and creepy nature of the film sets it among the top contenders of horror anthologies.

What happens when fairy tales turn dark? Tale of Tales is born. Although befuddling to begin with, it is interesting how all the tales intertwine and merge to complete the plot at the end. The stories are weird and horrifying ranging from a princess kept as an ogre’s princess to a king’s pet flea fed to become a monster. The cast is wonderful and the film is well shot. The gruesome tragedies outlined are worth watching multiple times over.

Horror fans will find Body Bags to be a treasure trove. Although it was initially meant to be a series, Showtime later opted for it to remain a film. The trio of horror tales compiled, Unleaded, Hair and Baseball Man was directed by Tope Hooper and John Carpenter. It is truly a shame that this anthology never ended up being a series as initially intended.

The reason behind why The Dark Tapes is underrated is due to the element of “found footage” used. Combining four tales of horror, the best part of this anthology is the atmosphere and vibe. Written and directed by Michael McQuown, the viewer is constantly entranced with the promise of something more. The hanging tension and dread keeps you hooked throughout the duration of the movie. With plenty of surprises along the way, there is not a dull moment in the whole anthology.

Phobia 2 is the sequel to 4BIA. Not only is it better than the first film, but this time five instead of four directors put their minds to make this film. Currently at number 3 on the charts of highest grossing Thai horror films, the film plays superbly as a solid anthology as well as a stellar sequel. Running through with a theme for karma, it does not display much gore. However, the scare factor is pretty high in this film.

The fact that Nightmares was created for network television meant that it lacked in gore. However, it ended up being a theatrical feature for Universal and the stories definitely make up for the lack of gore. If you are a person who loves legend based urban anthologies as well as segments, then Nightmares is definitely the right fix for you. Lance Henriksen and Emilio Estevez are some of the notable actors that play in the anthology.

This anthology plays onto an H. P. Lovecraft theme, with the main character played by Jeffrey Combs is the writer himself. The tale revolves round the prolific writer in an aged library guarded by monks where he copies stories from the Necronomicon. The copied stories are played out in a series of three Lovecraft tales each being weirder and creepier than its predecessor. The special effects highlighted are top notch. If you happen to be a fan of fantastic effects and plenty of gore, this movie is a must watch for you.

Although the title is not very flattering, 4BIA is a Thai horror film definitely deserving of a much larger audience. The film is brought together by four famed horror film directors. Each of the directors brings about a unique touch to the segments. Watching this film will remind everyone why Thailand happens to lead when it comes to Asian horror.

Deadtime stories highlights the tale of an uncle telling his nephew macabre bedtime stories. These warped version of original fairy tales heighten the fear factor of the child who continually reports seeing a monster in the closet. The uncle who is clearly not a fan of kids pays no heed to the child’s nagging. Blending in humor as well as fantastic horror, it is an interesting movie. More of a B-rated movie, it does not promise greatness but it does ensure a good time.

Campfire Tales is one of those rare gems that generally are forgotten. The anthology features a group of teenagers relating horror tales and legends around a campfire. Although many of the stories are familiar such as The Hook, The Locket, People Can Lick Too and The Honeymoon, the amazing cast makes the film worth watching. Despite lacking in innovativeness, this anthology will honestly have you rooting for the cast, the characters and even the plotline.

On this list of horror anthologies, you can expect to find eerie tales and interesting ones but all of them will grip you with horror and anticipation. If you are looking for a great scare as well as a good time then do add these to your list of movies to watch over the weekend.