Freaked DISCOVER THE ART OF PUBLISHING
Home Horror News The Invisible Man: Not so Transparent 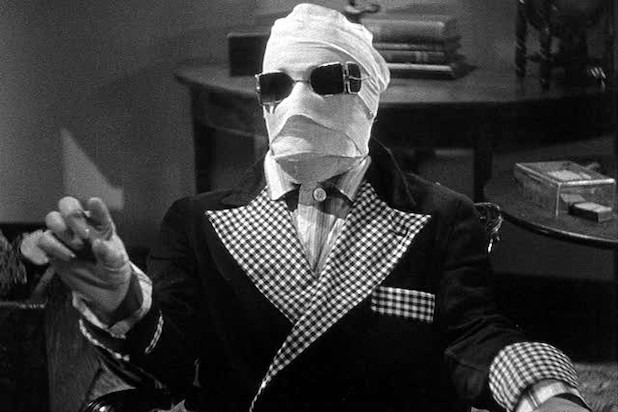 The general image conjured up when one thinks of The Invisible Man is of bandages unwinding, things flying around the room poltergeist style of their own accord and cigarettes hanging in mid air, smoking themselves.

The problem is, all of this seems old hat.

Whilst the ‘invisible’ effects may have astounded audiences in the 1930’s, it now seems passe and in a pantheon of classic movie monsters that also includes Dracula, The Wolfman and Frankenstein’s Monster, The Invisible Man is firmly relegated to the second or even third tier.

Why then have Universal decided to try to revive their ailing Dark Universe venture with such an insubstantial character?

Because friends and fiends, despite having no visible shape or form, The Invisible Man does have the potential for ‘depth’. The studio could resurrect this character and get an awful lot out of him by going one of two ways: jokes or Joker. Comic or Creepy.

If Universal’s plan is to build successful individual movies and then have the titular characters interact in crossovers ala the MCU then they need at least one of the characters to run with Marvel’s secret weapon, namely, humour.

What separated the beloved Marvel movies from their frankly dire forays into the world of film in previous decades was the inclusion of snappy, fast paced dialogue littered with sarcasm and genuine wit. Think the ever quipping Robert Downey jr as Iron Man.

Looking at the cast of characters Universal could bring together, there’s not much room for levity.

The Frankenstein Monster and Wolfman are both tragic characters and Dracula has to be played straight if he has any chance of being taken seriously in this day and age, but ‘old see through britches’ could be an ace in the hole, if given a razor sharp script and an actor with enough comic timing to pull it off.

Now, nobody is suggesting that Universal make a less visible version of The Nutty Professor ( we all wish that film was less visible already) Universal would still need to play up the horror to keep this ship afloat, but if done well, the use of humour could make T.I.M. a dark horse surprise star and fan favourite in any later monster mash ups. Make him scary, but more importantly funny, and you’re on to a winner.

Or don’t. The other option is to go all out in the other direction. Forget the funny, go with scary. Scary as hell.

But how do you make the passe Invisible Man scary again? The answer is to make the man scary before worrying about the invisible.

If you have never seen the original universal version of The Invisible Man, I’d highly recommend it. Whilst this movie did have several humorous moments, as a fairly faithful rendering of Well’s novel, James Whale’s classic (starring Claude Raines), importantly showed the titular character to be not just invisible, but also crazed and maniacal, driven mad in part by his attempts to regain visibility. He wasn’t just an invisible man, he was an invisible madman.

And as anyone who has ever read Alan Moore’s League of Extraordinary Gentlemen will know, this much darker side to the story can be exploited to great effect.

An invisible man is such a cliche idea at this point that in an of itself it holds little that will scare or unsettle an audience, but a lunatic, a homicidal, predatory or truly menacing character who is then made invisible? That has potential.

Think back to the conclusion of The Silence of The Lambs. Jodie Foster frantically waving her gun at an adversary she can’t see is immensely gripping, but only because that adversary has already been established for the audience as a genuinely terrifying threat. Her not being able to see him is only scary because it’s him.

If they are to succeed in making T.I.M. scary, Universal must make him seriously creepy or unnerving BEFORE he goes all see through. There is definitely the potential in the source material for that kind of character.

Now, I’m not suggesting that Universal make this an R rated feature and offer a Joker-esque character study of mental illness and psychopathy.

Intriguing as that might be, it’d be box office suicide, and with the lead character necessarily bandaged or, you know, invisible, for much of the time, the performance aspect necessary for such pathos painting could prove difficult.

However, tapping a darker strain than the audience is expecting could definitely be a way to go. The idea of an unseen threat is scary as long as it IS threatening.

Creepy or comedic, jokes or Joker. Those are the choices to make this film a success. Whether Universal will choose either of these options, we’ll have to wait and (not) see.