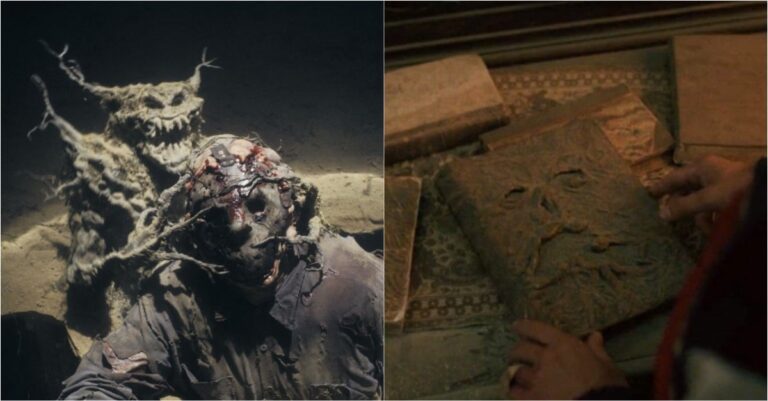 Fan theories are not always wrong. For many years, fans have had a hunch about Jason Voorhees and his identity being what’s known in the Evil Dead franchise as a “Deadite.” Most of these speculations have been fueled by Jason Goes to Hell (1993). Aside from the battle between Freddy and Jason, the film also introduced the Necronomicon-Ex Mortis Easter Egg in the Voorhees basement.

While a lot of people figured it was just a fun tribute, director Adam Marcus spoke out recently. In a new chat with Horror Geek Life, the director said that it was more than just a subtle reference.

“[I] wanted to create a mythology for Jason in this movie, because it had driven me nuts as a viewer,” Marcus explained, shedding light on Jason’s magically speedy growth. “She [Pamela Voorhees] makes a deal with the devil by reading from the Necronomicon to bring back her son. This is why Jason isn’t Jason. He’s Jason plus The Evil Dead, and now I can believe that he can go from a little boy that lives in a lake, to a full grown man in a couple of months, to Zombie Jason, to never being able to kill this guy. That, to me, is way more interesting as a mashup, and [Sam] Raimi loved it!”

Marcus also said, “It’s not like I could tell New Line my plan to include The Evil Dead, because they don’t own The Evil Dead. So it had to be an Easter egg, and I did focus on it…there’s a whole scene that includes the book, and I hoped people would get it and could figure out that’s what I’m up to. So yes, in my opinion, Jason Voorhees is a Deadite. He’s one of The Evil Dead. It absolutely is canon.”

Perhaps, fans really are onto something at times.