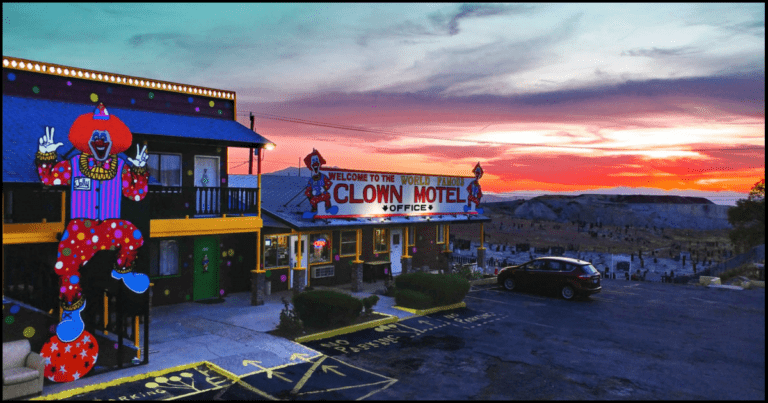 Although Las Vegas is known for its excessive gambling, shopping, and nightlife, you thrill-seeking horror fans can travel just three hours away, where you’ll be met by a haunted clown motel in a small town named Tonopah.

Located next to the Old Tonopah Cemetery, the haunted clown motel is widely known as one of America’s most terrifying places to stay, and it’s clear to see why.

Curious travelers have visited the motel and cemetery before, most claim they’ve never been so scared in their entire life, while others refuse to show up.

As reported by KLAS, in the 1990s after retiring from his state tourism job, Bob Perchetti built the creepy establishment which he owned for upwards of twenty years.

During his ownership, Perchetti – alongside his business partner – decided to move his house full of clowns to the motel to “put them to work”.

In 2017, the hotel was eventually sold to Hame Anand who, like Perchetti, showed an incredible passion towards clowns.

Anand then added two hundred additional creepy clowns to make the haunted clown motel an extremely notorious place to rest your head for the night.

Along with the owner, guests have been hearing unusual noises while spending the night in the motel, and it’s said to be a common occurrence coming from rooms 108, 109, 210, 215, and 217 – so make sure your attention is aimed towards or away from these rooms, depending on your preference.

The haunted clown motel is quite possibly the creepiest place to stay and for those of you interested, you can venture into rooms dedicated to iconic horror movies like Friday the 13th, It, and Halloween. Let’s hope there’s no Nightmare on Elm Street rooms!

Find out more about the motel, HERE!

Will you be visiting the haunted clown motel when social distancing protocols calm down? Let us know in the comments below.