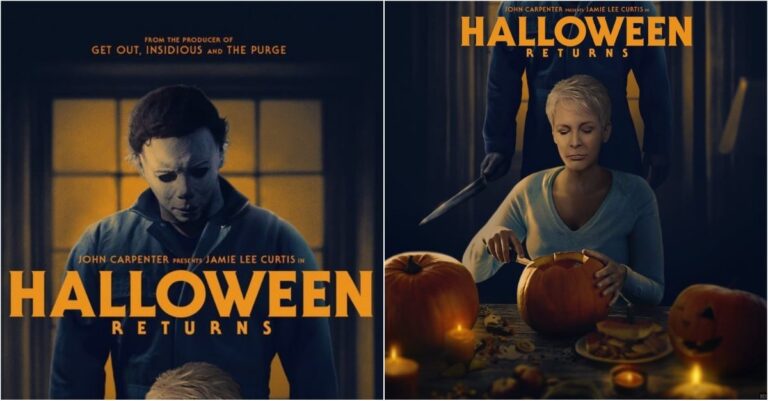 The Halloween franchise will be seeing a reinvention next year in which Laurie Strode will face a final confrontation with Michael Myers. The film will be directed by David Gordon Green. The most exciting part, however, is the fact that Jamie Lee Curtis will be reprising a role she played 40 years ago for the first time. This should be a real treat for all the horror fans out there.

The filming for the new Halloween film begins this Fall and the release date is set for Oct 19, 2018. However, the fact that it is still so far away from being released has not stopped fan’s from going crazy with their art. One of the many fantastic fan-made posters that the internet yields is one titled “Halloween Returns.” It is worthy to mention that this is not the official title of the upcoming film.

The poster features an elder Laurie Strode carving out a pumpkin while an older Michael Myers stalks her!

The poster is the courtesy of the artist PL Boucher.

In the movie,“Laurie Strode comes to her final confrontation with Michael Myers, the masked figure who has haunted her since she narrowly escaped his killing spree on Halloween night four decades ago.”

There are talks that Laurie’s daughter, Karen Strode, will be played by Judy Greer.