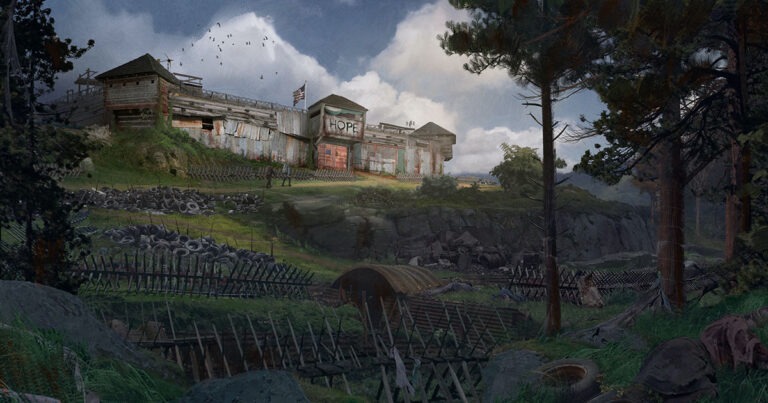 Revealed via Twitter on July 4, the concept art depicts a large fortified stronghold surrounded by traps.

Originally announced back in March 2019, Back 4 Blood attempts to recapture Left 4 Dead‘s concept, and “designed from the ground-up as an original, premium title and marries the best of what made the co-op zombie shooter so successful with new features and state-of-the-art technology.” In a sense, the game sounds very much like a re-imagining of Left 4 Dead, with plenty of modern improvements.

Chris Ashton, the co-founder and Design Director of Turtle Rock Studios, commented on the new title, saying “it’s hard to overstate what an awesome opportunity this is. We get to return to a genre that was born in our studio with over ten years of additional experience and zombie ideas racked up in our brains.”

The team stated that their aim for this title is “to advance the co-op zombie genre forward” and expand on Left 4 Dead‘s gameplay.

Left 4 Dead 2 was released on the Xbox 360 and PC back in 2009, and fans of the series have been clamoring for a sequel ever since. Though it may have been a long wait, it’s still exciting to know that the game is finally coming. The game does not yet have a release window, but this small bit of concept art is still a nice bit of news regardless.

Since the series’ debut, co-op zombie shooter games have become their own sub-genre. Games like Contagion, Killing Floor 2, and even the recent World War Z have taken Left 4 Dead‘s established formula and ran with it. Just as the gaming world is constantly evolving and changing, so is the world of zombie games. It’ll be interesting to see where Turtle Rock Studios decide to go with this title: will we see more of the same, or a massive overhaul in gameplay? Stay tuned for more news on Back 4 Blood.