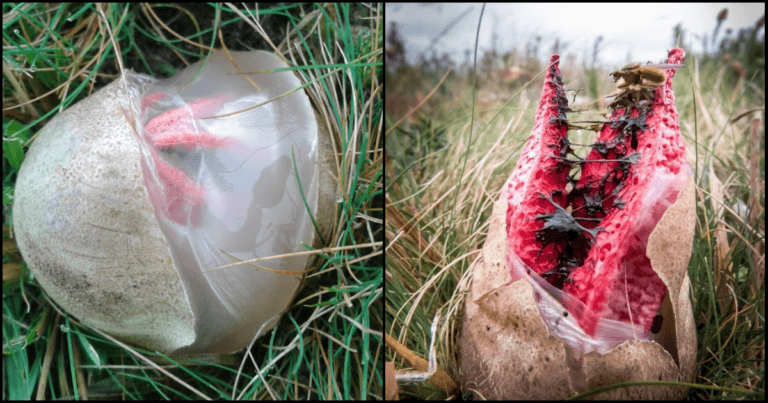 Some years ago, this alien-looking mushroom – more commonly known as the Octopus Stinkhorn, Devil’s Fingers, or Phalloid Fungus – was spotted growing in and around the New Forest district in Britain.

Below, you can see the early stages of the fungus as the sac gently confines the long, terrible smelling red fingers before their eventual release.

What makes this stand out from the rest, and also look quite otherworldly, is the fact that this fungus surfaces from an egg, whereas most usually emerge from the earth.

The Octopus Stinkhorn are native to Australia and New Zealand but found their way in Europe around 1914.

In the next stage of growth, the mushroom matures, revealing four creature-like tentacles which eventually grow to around 5-10cm in length.

A bad-smelling goo known as ‘gleba’ covers the inside of the tentacles (or fingers), attracting flies.

The once joined together fingers then split, spread out, and droop, which resembles an Octopus.

While it looks completely poisonous and dangerous, these mushrooms are rumored to be edible in the egg stage, while some countries still consider the fungus a delicacy. Though, nothing has been proven on the eating front.

Below, you can watch a video that shows the mushroom growing and demon-like tentacles emerging from the egg sac.

Although it is a measly 10 centimeters long, the fungus has an incredibly terrifying look that could easily lead the strongest minded people to look away.

If you enjoyed reading about this monster-like mushroom, why not go over and check out the flower that strongly resembles Darth Vader, HERE!

If you’re looking for something a little more mysterious (and a lot weirder), go over and check out the Slicing Skulls and Ominous Sunflowers brought to you by an extremely talented artist from Oregon, HERE!

What did you think of these creepy mushrooms? Make sure you share your thoughts and opinions with us in the comments below.