Freaked DISCOVER THE ART OF PUBLISHING
Home Horror News Meet Lilith, The Woman Who Claims To Be A Real Vampire And Drinks Blood 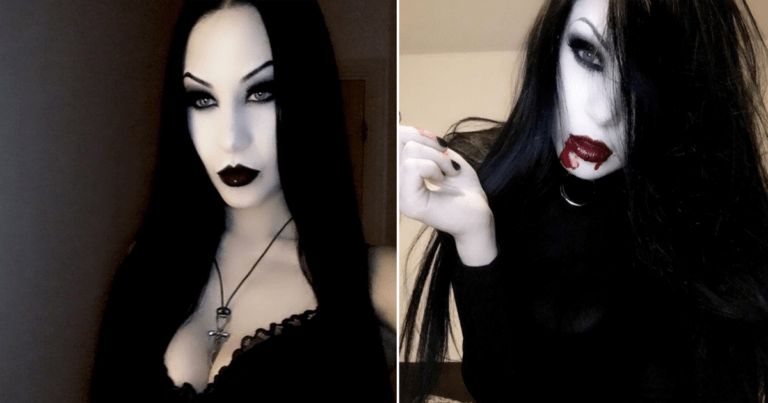 When it comes to the gothic, we here are Freaked definitely know our stuff, but every now and again we discover individuals who are so extremely dedicated to the lifestyle that even we are impressed. Lilith the 27-year-old Londoner can most assuredly be added to the list of gothic role models due to the way in which she believes she is a real-life vampire, going so far as to consume human blood (whilst reassuring audiences that all parties were willing of course).

Lilith claims to work a regular 9-5 like the rest of us, but unlike her fellow city-dwellers, she believes among other things that direct sunlight saps her of energy and that she is most alive at night. According to LadBible Lilith claims that “I can go outside and function in the daytime though I prefer to avoid direct sunlight as I find it to be draining. I feel my best after sunset.”.

Whereas she wasn’t actually bitten by any thirsty bloodsuckers Lilith claims that she noticed her transformation around the age of 18 and that it was a gradual process. It wasn’t long however before she was sampling her first taste of human blood. “I drank human blood firstly out of curiosity” as she recalls the metallic flavors “We make a small cut on the skin in a discreet spot, and drink it from there”. Lilith quickly explains that all of her vampiric desires are shared only with “close friends or people I meet who are interested in the lifestyle.” before going on to say that “it doesn’t have to be a large amount, I find it’s more about the overall act. It’s very intimate.”

When asked about how her obsession with becoming a vampiress started, it apparently boiled down to being inspired by none other than Dracula himself, as Lilith watched Dracula as a child and “became fascinated with these mysterious creatures”.

Lilith goes on to explain how she thinks her vampire spirit is in fact over 600 years old and links it to the fact that she feels “ancient” and she claims that the “old world feels familiar to me as if I’ve lived in it”.

If you’d like to find out more about Lilith don’t forget to head over to her Instagram page which has amassed over 155,000 followers already!