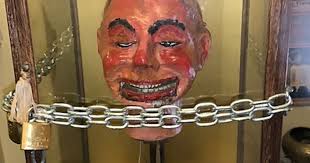 Footage has emerged online of a WW2 era ventriloquist doll that allegedly blinks and moves its mouth parts on its own at night.

The head of Mr Fritz, an undeniably creepy looking ventriloquist dummy that belonged to a former prisoner during World War II, is currently owned by Micheal Diamond from Liverpool.

An avid collector of curiosities and oddities, who also owns shrunken heads and the ‘elephant headed boy’ from a waxwork museum, Mr Diamond claims that Fritz has been passed between collectors for decades, because his ‘restless’ nature makes people reluctant to hang on to the prop.

Having found that the door to the glass case in which he kept Mr Fritz’s head seemed to be opening of its own accord, Mr Diamond installed a GoPro camera to capture the dolls nocturnal activities and posted the creepy results online.

The short clip seems to show Mr Fritz’s cabinet door opening by itself and after a long pause, shows the doll blinking and the mouth parts moving of their own accord. The wires for the mechanism controlling the mouth can also be seen rising and falling.

Whilst some will dismiss the clip off hand as a hoax, achieved through the use of poor lighting and transparent silk thread pulling on the door and the mechanisms controlling the eyes and mouth, others of a less sceptical and cynical nature appear to have been unsettled by the video.

Mr Diamond is certainly taking no chances and despite claiming to be ‘wary’ rather than scared, has placed a thick padlocked chain around the dummy in a manner reminiscent of the Anabelle films.

The full video can be viewed online here: