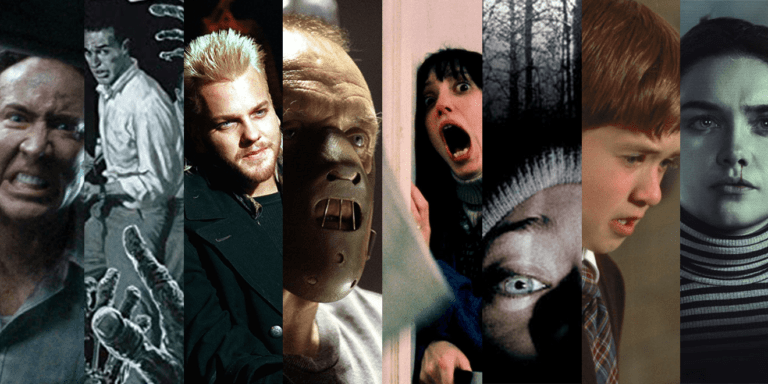 Samhain Season’s greetings and welcome to the final instalment in our countdown of the best horror movies for Halloween.

Seven creepy classics have already become victims and only the strong have survived this far. So here, for your devilish delectation are our top three recommendations for horror movies to enjoy on Halloween. Sweet dreams…

Although some would argue that this is one of the rare instance in which a U.S. remake is actually of comparable quality to the original, I would still recommend watching the 1998 Japanese version of this classic, but I’ll a cheat a little and include both versions as one entry and let you decide which you prefer  (incidentally, the 1998 version isn’t, strictly speaking, the original. A previous on screen adaptation of the novel was produced in 1995, though it is the 98 version I’ll be referring to. One ring to rule them all indeed).

This atmospheric chiller built around an Japanese urban myth about a cursed videotape that means impending death for anyone who watches it, creeps, lank hair dripping, onto most lists of scariest horror movies.

When it was released in the UK, the distributing company cleverly chose to place a disclaimer on the packaging saying that they weren’t responsible for any injury or death caused by viewing the film, a great tie in with the premise of the plot, but also an acknowledgement that the film is regarded as one of the few genuinely terrifying horror films out there, with the resident critic at The UK’s Guardian Newspaper labelling it ‘The scariest film ever made’.

Whilst I wouldn’t quite that far, The Ring or Ringu (not to be confused with ‘Pingu’ the terrifying plasticine penguin) is definitely not for the faint hearted. The sense of impending doom built by the pacing the film permeates the movie and manages to instil within the viewer a palpable feeling of helpless dread. As effective as it is uncomfortable.

That the film takes its sweet time to incrementally increase the tension is one of its great strengths, meaning that when the climax does come, the slow build has heightened its impact and leaves you swearing to never watch a traditional television set ever again.

Interestingly when the director of the American remake of Ringu, first saw the Japanese version of the film it was on a poorly copied VHS tape. You’d s*** yourself wouldn’t you?

If you go down in the woods today…then you’re an idiot. For the love of God, it’s Halloween, get inside and watch some horror. If you do feel the need to go creeping about in the pines, resist the urge and instead bang this beauty on. It’ll put you off for life.

The Blair Witch Project is the ‘found footage’ film that spawned a thousand immitators, but which is arguably, still the best and most effectivly frightening example of its genre.

Built around the simple premise that things unseen stalking you in the dark is fucking terrifying and that seeing someone else experience that in raw, un-edited footage would add to the experience, The Blair Witch project is another film that unsettles the viewer to such an extent that it stays with them long after watching, popping up from some buried corner of the mind like a terrifying jack in the box, the next time they pass the local woods.

The plot essentially involves a group of students heading out into the pine barrens to film a documentary about a local legend about the eponymous witch. The fact that the fabled old crone never actually appears on camera, the directors preferring to rely on the viewers’ imaginations to piece together the horror, is one of the most effective things about the film and what makes it a modern classic. And so, to number one…

Our top pick for the best movie to watch on Halloween is possibly, probably, maybe, might be, the scariest and indeed best horror film ever made. Arguably.

So similar is the sequence of events, the visuals and the atmosphere of what you see on screen to the way it plays out in the book, that it is almost like stepping into William Friedkin’s imagination and watching live as he reads it, seeing it the way he imagined it in his head, scene by scene. A disturbing thought, and a deeply disturbing film.

Built around the story of Regan, a young girl who becomes possessed by a demon and the struggle to free her from that torment, The Exorcist now sounds like a familiar plot trope. The fact that in all of the subsequent films to use this blueprint, none have ever come close to being as shocking or as powerful, is testament to the film’s quality (not to mention its uncanny knack of scaring the bejeezus out of people).

From the slow build atmospherics of the beginning, to its standard setting contrasts and jumps between loud and quiet, The Exorcist features some of the most famous scenes in all of horror movie history. Although often parodied in the years since the film’s release, these sequences still pack a powerful punch with every viewing and rank amongst the most genuinely unsettling in the history of film.

When a movie is so terrifying it induces  ‘cinematic neurosis’ to the extent that it can be written up in Journal of Nervous and Mental Disease, and cinemas are compelled to have ambulances and sick bags for audience members standing by, you know that it’s a special kind of scary, the kind that should be savoured, appreciated and wheeled out on special occasions.

If only there was just such an occasion coming up…