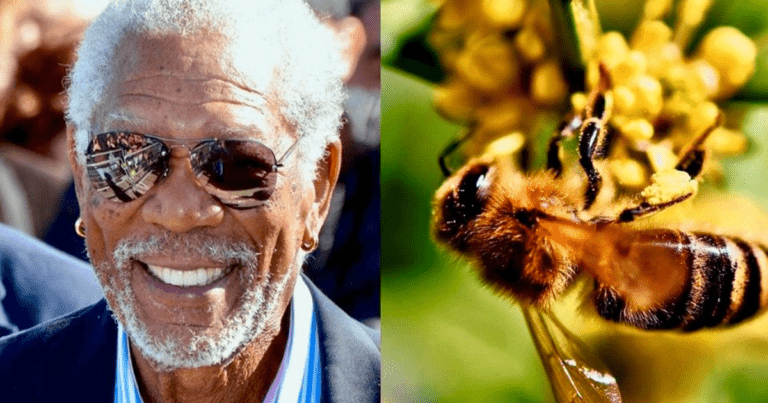 As far as apocalyptic conditions go, we’re definitely getting our fill so far this year, so it is about time for some good news about people who are attempting to turn the tide. One of those people just happens to be Morgan Freeman who is quietly converting his 124-acre ranch in Mississippi into a bee sanctuary.

Originally starting back in 2014, Freeman appeared on the Tonight Show with Jimmy Fallon and spoke about how he had just imported twenty-six hives of bees from Arkansas. Strangely enough, the Hollywood megastar reported that he didn’t even have to wear his beekeeper outfit when feeding the bees, and believed that he would never get stung. Claiming that the outfits were for people “who can’t resonate”. He went on to say that “I have not ever used the beekeeping hat with my bees. They haven’t stung me yet”.

When asked why he has taken up such a huge task, Freeman explains that he is part of a ” concerted effort for bringing bees back onto the planet” and that bees are “the foundation…of the growth of the planet” and that if the bees continue to die off at the rate that they are expiring now we will shortly face incredible difficulties as a species.

And Freeman is certainly right on this issue, with bee populations being the lowest that they have been in decades due to ‘colony collapse disorder’. Bees are responsible for pollinating over 80% of our crops around the globe so if they were to disappear then the cultivation of food around the world would grind to a halt.

Obviously most of us don’t just have gigantic ranches to put to one side like Morgan Freeman, but if you want to do your part to save the bees there are a few easy steps you can take. You can plant a bee garden to encourage bees to pollinate, or even simply avoid buying products which employ pesticides that are proven to be a contributor to the decline of the insect’s populations.