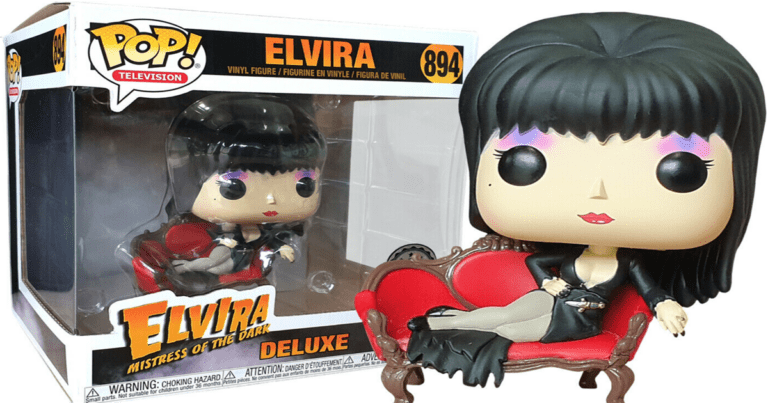 Since 1981 Casandra Peterson has been the premier horror hostess for all things schlock horror with her character Elvira, the Mistress of the Dark. No fan of vintage chillers can deny their collection isn’t complete without paying homage to the Queen by including at least a few bits of Elvira memorabilia.

Finding authentic pieces of merchandise once meant getting lucky at the flea market or local garage sale. After all, Elvira herself has always represented that niche aspect of the horror world. Those late night binges of low-budget nonsense that we all loved to hate or hated to love. But thanks to Funko Pop, a brand that has become synonymous with geek culture with their bobble-headed vinyl icons; all ages and levels of horror aficionado can now set a place for the one true Mistress of the Dark among their home and office displays as retro and contemporary come together once again to bring us Elvira Funko Vinyls!

Even Elvira herself is stoked at the release of the Deluxe Edition as she took to her personal Instagram to tell all her creatures of the night to be on the lookout for these little treasures of nocturnal nostalgia.

How The Mistress Ascended to Her Throne

Elvira is to horror what Dolly Parton is to country music. She is ageless. Gorgeous. She is both dainty and deadly. A gentle voice to guide us through the scary parts of the best B-Rate horror films she can find; while still reminding us that she dwells comfortably among the darkest parts of our fears. She is your best friend or your worst enemy, and we have loved her insane duality for decades.

In 1981 producers decided to revive a Los Angeles based horror program called Fright Night six years after the death of Larry Vincent, the program’s original host. The idea was to bring on a female host.

Cassandra Peterson won the roles by combining the dark, gothic aspects sought in style of The Vampira Show, with the snarky, comedic concept of the California “valley girl” archetype. Peterson’s Elvira character went on to become a national horror icon, with a full length feature film – Elvira, Mistress of the Dark, produced in 1988 by NBC Productions. From that time on Elvira was a mainstream fixture in the campy slasher film genre.

The character is as popular now as ever, entertaining and lovers of the macabre both young and old, still serving as our favorite precocious hostess.