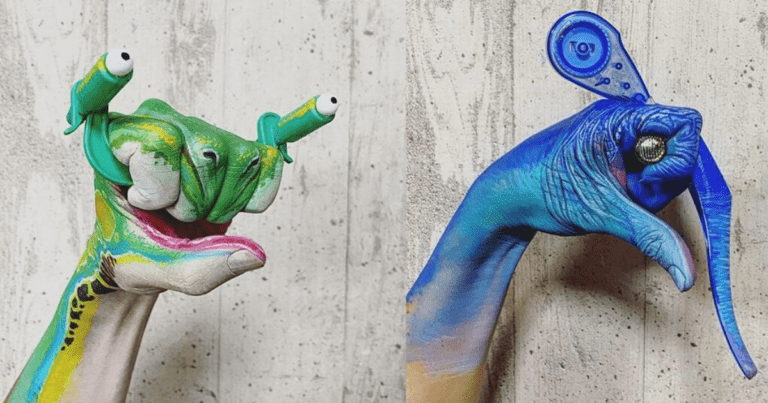 With most people spending more time at homes these past few months due to quarantine restrictions, it is no surprise that creativity continues to reach its peak.

Everyone was able to find exciting ways to approach their art, including this makeup artist from Tokyo, Japan who magically flaunts his craft by using just his two hands, paints, brushes, and some household items.

Amazing JIRO is a renowned special effects expert known for creating seamless makeup designs that easily defeat multi-million dollar computer graphics. When a lot of his planned projects were temporarily suspended or scrapped because of the pandemic, JIRO was forced to create his art alone while stuck in his home.

Because he cannot perform makeup to another person, he decided to do everything on his hand where he paints monsters from cute charmers to unsettling creatures. The results, given his incredible talent, is expectedly breathtaking.

Here is some of his recent work.

To complete his masterpieces, he even added household items that complemented its bizarreness.

He even created a hilarious fitness video with his five fingers singlehandedly (pun intended) doing the entire workout:

And who would not adore the uncanny designs of fan-favorite Star Wars, Spielberg and Marvel characters he was able to pull off:

JIRO described his “hand” arts as “a fun and cheerful activity aimed at those who are unable to leave their homes due to the current crisis.”

He added, “I hoped that I could improve everyone’s gloomy moods a bit, so I came up with monsters as a theme that eat gloomy feelings. In times of hardship, we save and cheer ourselves up by using the limitless power of imagination.”

What are your thoughts on Amazing Jiro’s beautiful monster creations he designed in his hands? Will you be taking part in the one hand challenge?