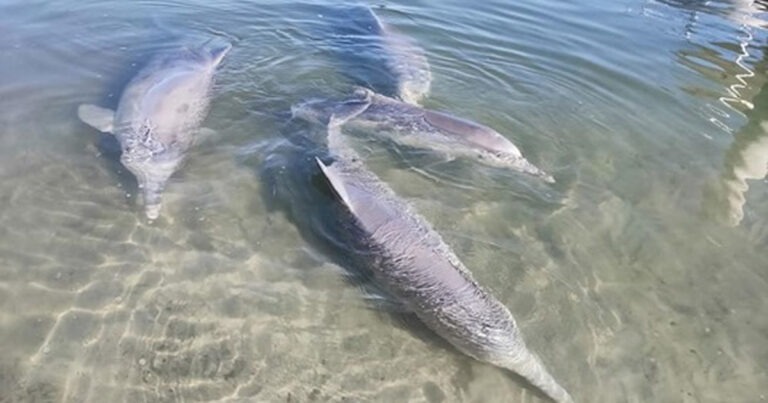 Barnacles Cafe and Dolphin Feeding at Tin Can Bay in Queensland, Australia has been a popular destination for tourists and locals alike for quite some time. While some of this has undoubtedly been the scenery, the majority of it has been to do with the humpback dolphins themselves. However, because of recent restrictions, there haven’t been many visitors to the place.

While this would naturally cause some issues for the owners, it looks as though the dolphins have noticed the absence of people. According to a report by 7NEWS.com.au, the animals have been bringing gifts to shore, apparently in an effort to get more people to visit. It’s also speculated that they’re trying to communicate something.

The owners have claimed that, while the humpback dolphins have shown similar behavior in the past, it hasn’t been to this degree. As a result, volunteers at Barnacles Cafe and Dolphin Feeding have suggested that they may miss interacting with people much more than previously thought.

However, this is a theory that has been rebuffed by Barry McGovern, a Ph.D. student at the University of Queensland who studies water-based animals and wildlife. While he says that it’s not impossible for the dolphins to miss humans, it’s much more likely that they simply miss the routine, alongside the free meals that people tend to bring.

McGovern also speculates that the dolphins may be bored, which could be a driving factor in their relatively unique behavior. There have been a few gifts brought to shore by the humpback dolphins, but the more common ones have included coral, barnacle-encrusted bottles, and sea sponges.

Regardless of what the main reason for the dolphins’ behavior is, the videos that Barnacles Cafe and Dolphin Feeding certainly make it look quite interesting. Hopefully, they’ll be back interacting with people as soon as possible.