Freaked DISCOVER THE ART OF PUBLISHING
Home Animals Why The Titanoboa Is Every Ophiophobes Nightmare. 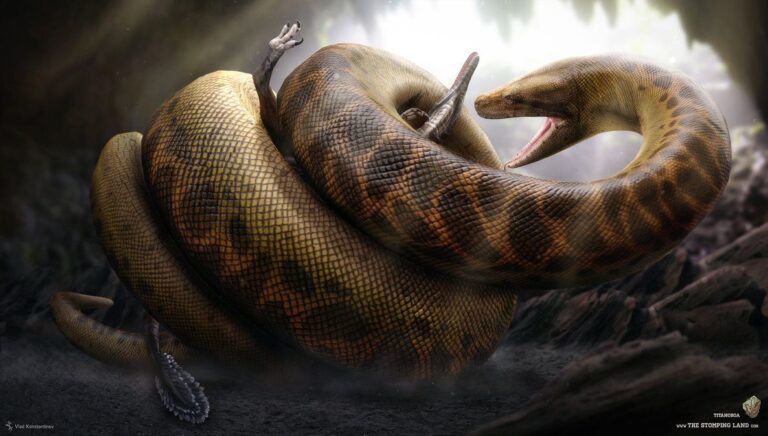 The Titanoboa is widely regarded as the largest snake to have ever lived. It roamed the earth around 60 million years ago during the paleocene era and due to its size was thought to have been somewhat of an apex predator.

Measuring in at over 40 feet long and weighing over 2500 pounds, the Titanoboa hunted anything that was part of the swamps food chain, including giant prehistoric turtles and even crocodiles. The Titanoboa was “the largest predator on the surface of the planet for at least 10 million years”

Being non-venomous the Titanoboa crushed its prey to death, exerting a force of over 400lbs per square inch, which is more than one and a half times the pressure you would feel lying under the weight of the Brooklyn bridge.

The Titanoboa is thought to be amongst the first few species of reptiles to gain dominance after the great extinction event that killed the dinosaurs, and as such was allowed to thrive. The reason that the Titanoboa, as well as other reptilian species, grew to such gargantuan proportions was mainly due to the climate of the epoch. In such warm temperatures, cold-blooded creatures naturally grow a lot larger.

The skeleton of the Titanoboa was first discovered in a mine in Cerrejon, Colombia and the remains of the giant snake were buried amongst “a giant world of lost reptiles – turtles the size of a kitchen table and the biggest crocodiles in the history of fossil records”.

Scientists are still unsure as to whether the Titanoboa is more closely related to the anaconda or the boa constrictor, but they are fairly certain that it would’ve spent most of its time in the water. This is not just because of the evidence of the Cerrejon region being mostly waterlogged during the paleocene period, but also because of the way in which modern-day anacondas hunt their prey. Another thing to factor in when considering the living habits of the Titanoboa is that due to its size, it would have been able to move around in the water a lot more freely.

Thankfully though we’re not getting any Anaconda situations any time soon, as even though there are many monstrous reptiles that slither across our globe, this prehistoric behemoth is a thing of the past.