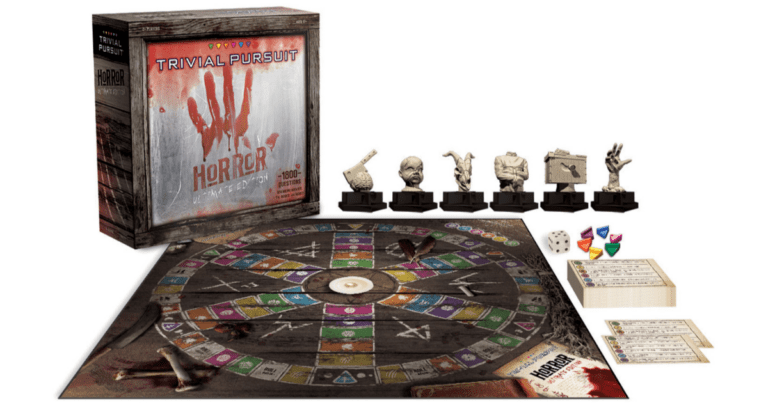 Are you the biggest fan horror has seen since the beginning of time? Do you know every horror icon inside out? Could your knowledge put the greats to shame? Well, now you’ll be able to truly test that when Trivial Pursuit: Horror Ultimate Edition releases later this year.

Players will be put through vigorous challenges and survival skills are needed if you are to come out of this game unscathed and embarrassment free.

Six terrifying categories await as you must depend on your skill, along with some luck, if you wish to make it out alive. Gore & Disturbing, Psychological, Monster, Paranormal, Killer, and Comedy are the only thing that stands in between you and true horror greatness.

Here is what you can expect from the board game when it eventually drops this fall.

Trivial Pursuit: Horror Ultimate Edition, which is available for ages 17 and above, can be played by two to six players at a time and, upon release, will be found in your favorite local game store for just $49.99.

In 2018, a 600-question Horror Movie Edition of Trivial Pursuit was released but fans can now begin to get excited for this monstrous game 3x bigger than the original.

This follows the news of an Officially Licensed Friday the 13th Board Game that has been rumored to be hitting shelves this summer. It looks like us horror fanatics have much more to look forward than first thought.

Will you be ordering yourself or someone you know a Horror Ultimate Edition Trivial Pursuit set? Make sure you let us know your thoughts on the board game in the comments.