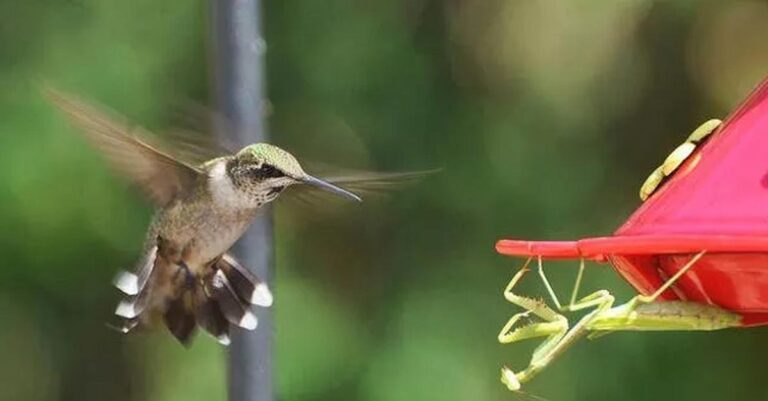 Praying mantises are easily one of the most badass bugs around. They are notorious for ripping their mates’ heads off. Some people even worship them as a sign of knowledge and wisdom. Now, recent research has shown that praying mantises can get even more metal than they already are: consuming bird brains. The birds are attacked from the head and the bugs slurp their brain like it is some fancy smoothie.

The typical diet of a praying mantis is spiders and insects. Sometimes, dead animals make a surprise appearance in their diet. However as of 2017, scientist have discovered that these bugs will regularly prey on birds and mammals. In fact, they attack smaller birds, such as hummingbirds, because they relish the taste of brain tissue.

These creatures pierce the bird’s skill and then suck out the brain. Ecologist, Dietrich Mebs, states that they “hold [their prey] and eat them while they’re still alive, slowly and slowly until there is nothing left.”

Praying mantises have been known to consume birds. However, such behavior was considered an anomaly and scientist never collected data on it. Now that scientists from several top research universities from all around the world have taken a deeper look at this activity, they have found out that it is actually a habit. Praying mantises all over the world engage in this activity on a regular basis.

Except for Antarctica, all mantises hunt birds. First it was assumed that mantises that live in warmer climates are the only ones that engage in such behavior. It turns out that climate has nothing to do with this habit. According to research, praying mantises consume 24 different types of birds, the most common being hummingbirds and passerines. The real reason behind this is still unknown.

How Can Praying Mantises Overpower Birds?

Praying mantises take down relatively lightweight and small birds – weighing about only 6 grams. However, the question remains as to how can a slow flightless insect take over a fast and speedy bird? Praying mantises are very sneaky. They will manage to surprise attack a bird while it is perching. The insect holds onto the bird with its hind legs and strikes it on the head. The act pierces the skull and reveals the brains for the insect to consume.

Now it is abundantly clear that praying mantises are not to be messed around with. Who know a brightly colored bug like that could actually be a brain slurping metal zombie creature? And to think that this is not a mutation of any form or an abnormality is the most horrifying part.