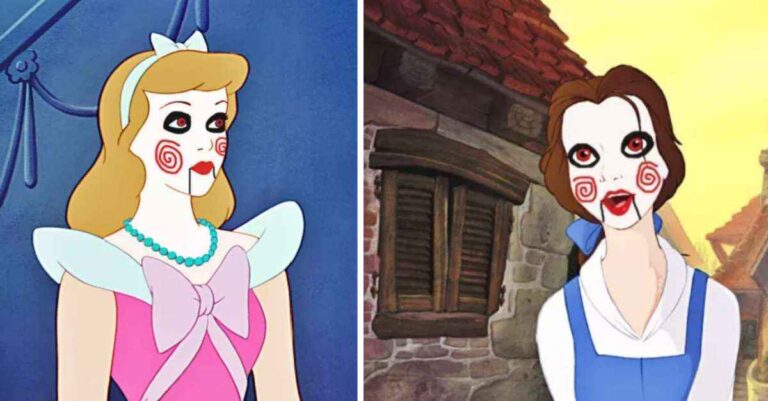 “Do you wanna play a game?”

That is where it all started, but it seems like ‘Saw’ is literally everywhere. And I say that with as much of a serious face I can muster. However, there was one thing we knew Saw could never mix with.

And what was that you might ask? Well, Disney of course! How could movies about violent traps and deaths mix well with wholesome family fun? Following is how.

One person thought it would be a good idea to re-imagine our favorite princesses as dolls from the Saw franchise. So scroll on below and take a look.

Ariel would be the one carrying on Jigsaws ‘legacy’ from the sea. After all, nobody is safe.

Belle would probably make intricate traps that would boggle even the most imaginative minds. Why else did she spend time with her inventor father?

Cinderella’s step-family now probably wish they hadn’t been so mean.

Snow White would join up with the Evil Queen to come up with new poisonous ways to kill everyone.

Mulan would definitely be the secret agent in disguise to find new players for Jigsaws game.

Aurora would use the power of her three fairy friends to cruelly torture others.

Think we didn’t do these Princesses personality justice? Comment on below and let us know!