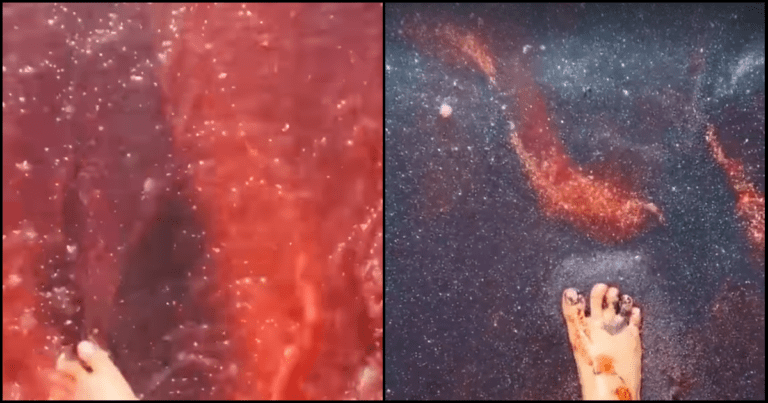 Somewhere in the Persian Gulf lies a popular tourist attraction called the Hormuz Island, and while it’s natural beauty brings people from all around the world, its crimson waters and galaxy sand keeps them coming back.

Less than one month ago, a short video was shared on social media which showcased the Hormuz Island’s ‘Red Beach’ and it has since gone viral.

Although it would be pretty interesting and cause a lot of debate if it was unknown, the real reason behind the beach’s reddish shade is the Red Edible Mountain.

Rich in a red oxide soil called Gelack, the Red Edible Mountain – known for its sheer beauty and edibility – sits on the shoreline, ultimately giving the beach and waves a crimson glow.

Gelack is not only a valuable mineral for industrial purposes, but also can be (and is) used as a spice in some cuisine.

However, Hormuz Island is not just home to the mystical sand and water, it also has accommodation options and many more attractions for tourists to visit.

It is said that walking along the beach at sunset or sunrise makes for some mesmerizing memories, as this is when the sand sparkles the most.

Another positive regarding the Red Beach is the fact that you’re able to enjoy yourself and the sight without having to worry about the water staining your clothes, as it’s easily washed off.

Below, you can see the viral video of the Red Beach’s blood-like water, which looks like the burial ground of Jason Voorhees‘ victims.

Would you ever go and see the Red Beach for yourself? Be sure to share your thoughts and opinions and let us know in the comments below.