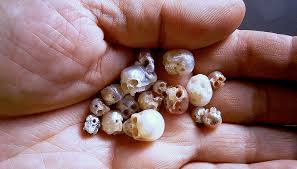 These diminutive replica human skulls look like archaeological evidence for the existence of the ‘fae folk’ but are actually carved from coreless pearls.

Nakaba who prides himself on the fact that all of his jewellery is wearable, experimented with several other materials for his macabre creations including ivory and coral before finding that the pearls lent themselves best to his gothic designs.

A visit to Nakaba’s website shows a variety of creative designs and ‘wearable sculptures’ crafted from unusual materials, but it is the tiny intricate skulls that have garnered the most attention. Speaking about the lurid subject matter Nakaba said that he enjoys the contrast between the pristine nature of the pearls and the dark objects he carves them into.