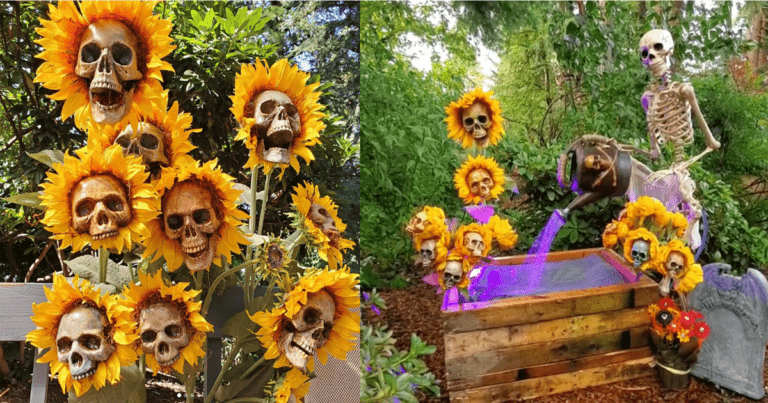 Okay, folks enough foreshadowing! But these skull-themed sunflowers are incredible and the talented artist behind them certainly deserves an atmospheric build-up that at least tries to do his work justice, right?

The man behind the macabre macrame and the morbidly menacing malathion-free garden is Beejay Oslon. An Oregon-based artist who is somewhat of a Renaissance Man, since he also owns a brewery and creates an eclectic variety of horror-themed crafts which can be purchased by the brave, bold or simply fans of horror or great art in general. Just take a look at his Official Instagram!

Oslon is a busy man. When not involved in the hectic demands of running Pipeworks Brewing or creating incredibly visceral art over at Nocturnal Studios, he’s on the hunt for DIY inspiration to generate the best boo for the buck.

And slice he did, transforming fake human skulls that were destined for the clearance bin into a hybrid of terror and beauty that is sure to unnerve both gardener and fear aficionado alike. The flowers were just the start. Check out the disturbingly delightful finished product.

If you love this as much as I do, then rejoice as you too can have a piece of Olson’s art (or several) because as mentioned above – he creates pieces that he’s sure can find a place in any adventurous dwelling. Check out his stuff at Nocturne Studios!

If you’re looking for booze instead of boos – I encourage you to check out Beejay’s Brewery on Instagram too —- And no underage drinking folks. The last fool to try and pass a fake ID by these guys is pushing up those sunflowers!