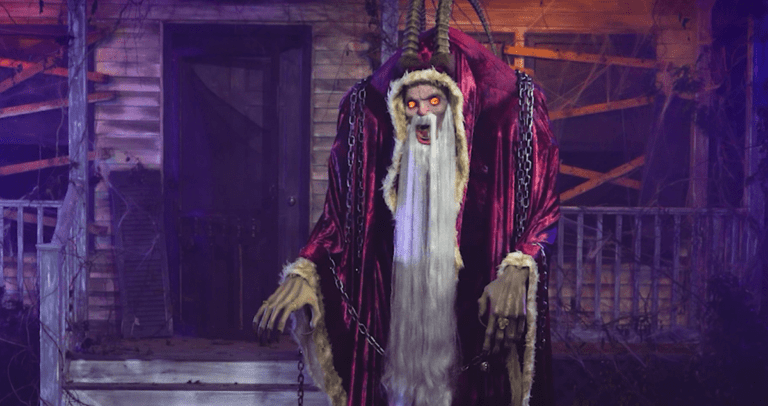 Spirit Halloween has become increasingly popular for its holiday-centric collectibles and other merchandise in recent years. With some of its early products, it’s easy to see why. Now, the company looks to keep building on that with its upcoming line of Trick ‘R Treat goodies. While there’s a lot on offer, it’s the Krampus-themed products that are getting a lot of attention.

Out of the Krampus range, it’s a replica of the titular character that stands out. While some of this has to do with the animatronics’ size (7 foot 5 inches tall) it’s also how it works that is quite impressive. The animatronic features realistic rattling chains, yellow LED lights, and side-to-side motion.

However, it’s the sounds that the Krampus animatronic makes that’ll scare most people. Fans of the Legendary Pictures-produced film would know how bone-chilling this can be, with the replica sounding almost exactly like its movie counterpart.

The animatronic is exclusive to Spirit Halloween and is expected to start shipping on August 12. Buyers can pre-order it from the Spirit Halloween website for $349.99. There’s also an extensive amount of other merchandise available, ranging from mugs signs. There’s even an alternative take on the typical “Santa is coming to town” focused on the film’s titular character.

The character itself stems from Bavarian folklore, with the film following a family as they are hunted and murdered by the Krampus. It is one of the few horror films to be centered around Christmas, with the villain being portrayed as somewhat of an evil Santa.

The Legendary Pictures-led film, released in 2015, received positive commercial and critical reception. Despite receiving a tease for a sequel in the movie’s final act, there’s been no official confirmation about work on Krampus 2. In addition, it’s unconfirmed whether work on it will ever start, though that hasn’t stopped fans from wanting it to happen.

Check out the video that Spirit Halloween released.