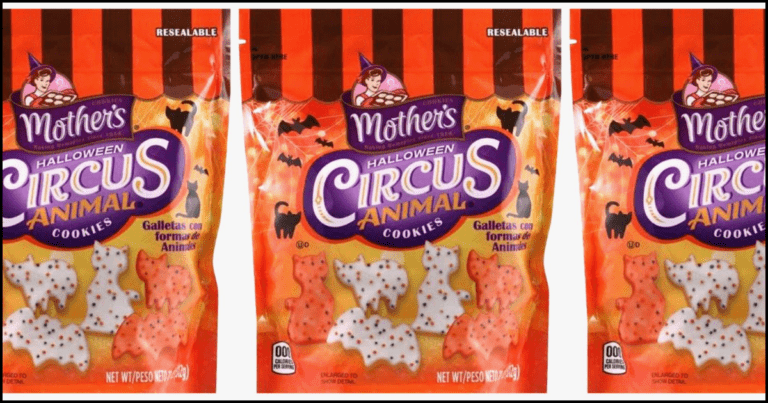 While Halloween may not go exactly how we planned when it arrives later this year, one thing for sure is that the candy will be just as good as ever.

We recently reported on multiple candy’s, new and old, set for release this Halloween, and accompanying Hershey’s Vampire Kisses and Reese’s Franken-Cup’s is the debut of Mother’s new Halloween variety of cookies.

Mother’s Halloween Circus Animal Cookies now come colored in white and orange to support the haunted holiday, with the animals shaped like spooky cats and sinister bats instead of their traditional shapes.

Mother’s Halloween Circus Animal Cookies are available on Dollar General’s official website – see it HERE! – which you can buy for $2.75 per 11 oz. bag.

However, the cookies are not exclusive to Dollar General as BevMo! – a liquor store located in California, Washington, and Arizona – has the treats listed on their website too, HERE!

While we are quite obviously excited about the cookies, there’s no current evidence to confirm the flavor of the orange and white snacks, meaning they could have their own special taste, or be the exact same as the original.

Over 10-years ago, Mother’s had released a range of Halloween cookies similar to their new batch, with the only real difference being the orange and white frosted treats were shaped as regular circus animals.

Although we were impatiently waiting for Halloween already, the addition of more candy just makes us want the best day of the year here as soon as possible!

If, like me, you’re obsessed with Halloween candy, go over and check out the return of Kit Kat’s Pumpkin Pie flavor, HERE!

Another Kit Kat flavor that could go down well with fans is their new Witch’s Brew which is said to taste like marshmallows – check it out HERE!

Are you excited about the upcoming Halloween candy? Be sure to let us know in the comments below!