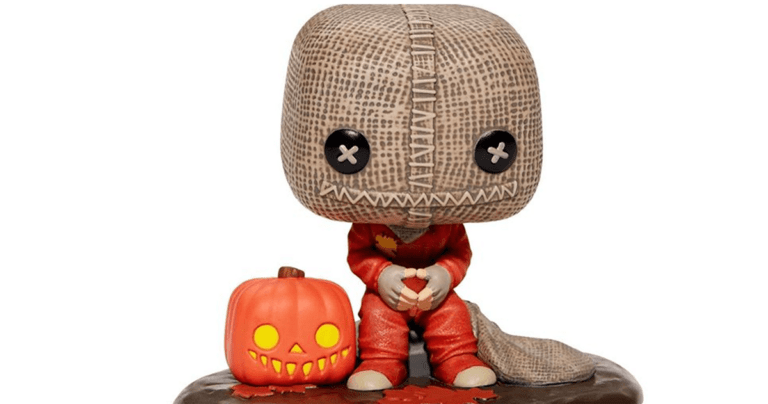 Spirit Halloween has been gearing up for the holiday season. Over the past few weeks, it’s announced a wealth of new products for release. The majority of these have been exclusive to the brand and based on hit films. Now, the company has unveiled a Trick ‘r Treat Funko POP! Toy. The toy, which is available on the company’s website, is already available for pre-order.

Standing at the typical height of a Funko POP!, the figure is of primary protagonist Sam. He also appears practically identical to what he looks like in the film, including a burlap sack over his head, an orange jumpsuit, and a jack-o lantern. There’s also a significant amount of detail in the burlap sack. Like many other products released by both companies, a lot of effort went into ensuring that the POP! is high-quality.

The character has gained a significant amount of popularity in the years since the film’s release. To date, this has made Sam relatively iconic for many modern and younger audiences. This continues to increase around Halloween, with Tick ‘r Treat being watched repeatedly over the holiday season. Naturally, Spirit Halloween and Funko have aimed to capitalize on this enduring popularity.

The Funko POP! is exclusive to Spirit Halloween and should begin shipping out near the end of September. This should give the majority of buyers enough time to have them delivered for Halloween. As a result, the Sam POP! could be a perfect gift for Trick ‘r Treat lovers. Alongside that, the timing couldn’t be any better.

The Funko POP! is available through the Spirit Halloween website for $21.99, plus postage. While on the site, potential buyers should be able to find quite a few other characters and products that they might want to pick up. With how good the collectibles are, they should be worth the money.