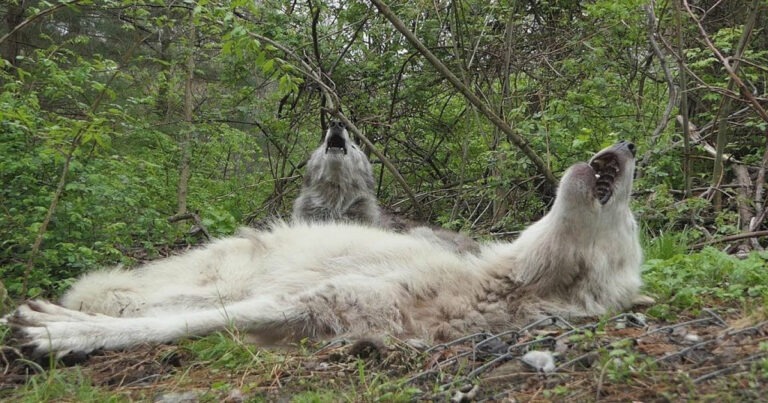 There are a few animals that come to mind when the word ‘lazy’ is used. Perhaps the most notable are sloths, though pandas aren’t too far behind. Wolves, however, wouldn’t be anywhere near the top of the list. That being said, these two lazy gray wolves were caught being a little too relaxed.

A new video released by New York’s Wolf Conservation Center shows that some wolves can be just as lazy as people. The video features the animals, named Zephyr and Alawa, howling for another wolf while laying on their backs. Needless to say, it’s not the sight that most people would expect when they hear a howl.

According to the Wolf Conservation Center, the unseen wolf is named Nikai, who is apparently best friends with Zephyr and Alawa. This is backed up by several photographs that the conservation center posted to Instagram.

In the photos, the three wolves are seen going about their daily lives. As many people may expect, this also includes a few lazy days. However, they’re also shown to be quite physically active, with some photos showing them making their ways across the park. Alongside this, the pictures show the three wolves in all of their natural glory.

Clearly, the howling video was the trio communicating across a vast distance before going to sleep. Regardless, the lazy gray wolves seem to have enjoyed their pre-bedtime nap. What the conversation was actually about, however, remains anybody’s guess. As long as they’re not planning on overthrowing the planet, ala Planet of the Apes, everyone should be happy.