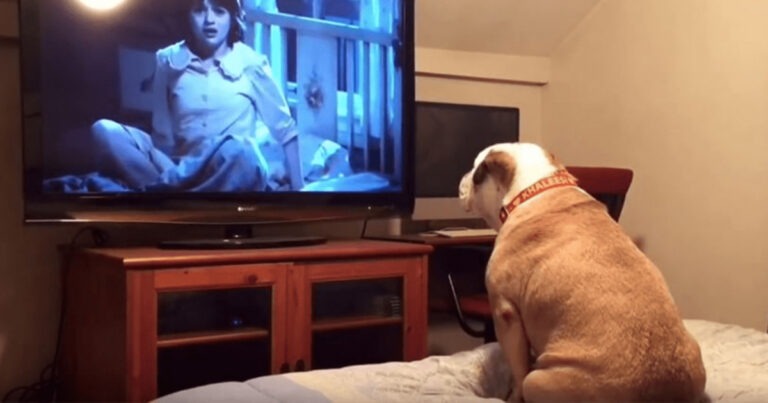 The Conjuring (dir. by James Wan) has made its name as a cult classic among horror movie lovers ever since its release in 2013. People of all ages flocked to see the freaky flick, making it a huge success with almost $320 million at the box offices. Its reach was so influential it has now transcended species and has made a new furry fan: Khaleesi the bulldog.

The video shows Khaleesi the bulldog intently watching a tense scene in The Conjuring where we see a young girl trepidatiously checking underneath her bed for something sinister and scary. Khaleesi is immediately on guard, barking at the screen, seemingly wanting to protect this little girl. As the scene escalates Khaleesi narrows in her focus, erupting in a flurry of protective barks as the scene comes to a climax and the girls scream and run for their lives.

According to owner Dawn Curran, Khaleesi is a huge horror movie lover. Her brother Elvis? Not so much. In the photo above, the pair were preparing to watch Paranormal Activity 2 – a movie that Khaleesi most certainly enjoyed (and which Elvis probably fell asleep on.) Dawn also says that the protectiveness Khaleesi showed during that scene in The Conjuring is very indicative of her everyday personality, especially around children; making Khaleesi a wonderful guard dog indeed.

A pop-culture princess, Khaleesi’s mom loves to dress her up and show her off on the iron throne, photobombing The Walking Dead, or cosplaying as Beetlejuice. Recently recovering from knee surgery, Khaleesi is as thriving and thrill-seeking as ever. With no shortage of adorable content, this horror movie-loving dog and her laid-back brother are a precious pair of pups. If you want to keep up with the daily shenanigans of these boisterous bulldogs with some huge personalities, you can follow them on TikTok (@elvisandkhaleesi) Facebook or Instagram.