Freaked DISCOVER THE ART OF PUBLISHING
Home Movies DeepFake Video Portrays Robert Downey Jr. and Tom Holland In Back To The Future 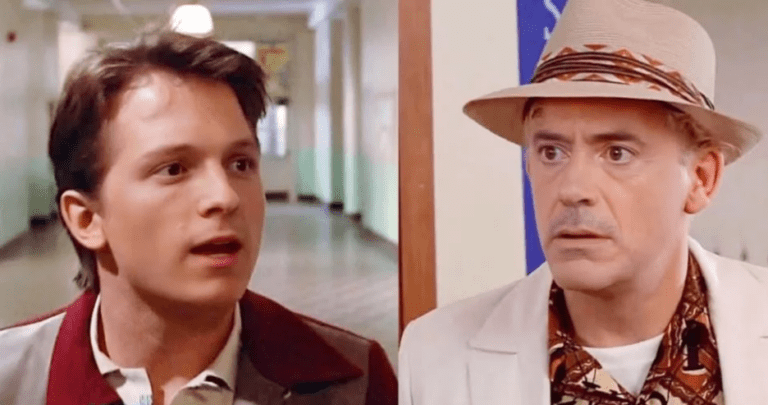 Who’d have thought a DeepFake Back to The Future video starring some of Marvel’s biggest icons in Ironman’s Robert Downey Jr. and Spider-Man’s Tom Holland is exactly what we all needed.

The relationship between the two stars, where Downey Jr. acts as a sort of father figure to the 23-year-old Holland, has perfectly transitioned over from the Marvel Cinematic Universe and looks like an obvious choice if Back to The Future was to join the long list of classic movies to secure a modernized reboot.

DeepFake has been taking the internet by storm in recent times, after trending for replacing The Shining’s Jack Torrance with Jim Carrey and portraying Rocky’s Sylvester Stallone as Home Alone’s Macaulay Culkin.

The video displays the unforgettable scene where Marty McFly, who is now the freakishly similar Tom Holland, unintentionally makes his own teenage mother fall in love with him, all while Doc Brown, now Robert Downey Jr., struggles to make sense of the 1980’s slang word, “heavy”.

The whole video is the perfect introduction to those who are in the dark about just how extremely entertaining DeepFake videos can be, especially ones where we get to witness Sylvester Stallone left home while his family suffers a brutal fate. We don’t want to ruin it, so be sure to check it out here!

If you are more interested in the Back to The Future DeepFake video, do not threat, we have you covered! Watch the wonderfully insane YouTube clip down below!

Unfortunately, we may never get to see this famous duo take on the roles of Marty and Doc, as director Robert Zemeckis has previously stated that there will never be a Back to The Future 4, despite fans’ love of the franchise, although Hollywood is never against rebooting historic movies with a new fresh outlook.