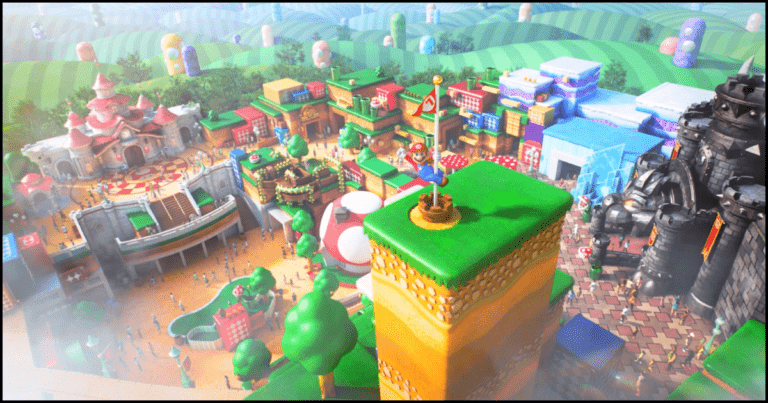 The long-awaited attraction brought to us by Universal Studios Japan is finally moving towards completion, but it looks like fans will be forced to wait even longer to visit the incredible-looking Super Nintendo World.

Understandably, Super Nintendo World’s grand opening – which was scheduled to take place this summer – has been pushed back and delayed due to the ongoing worldwide pandemic.

Although a summer opening looks unlikely, Business Times have announced that a formal announcement regarding Super Nintendo World’s launching date is expected to drop sometime this week.

The attraction is filled with all things Nintendo, and supporters will notice gigantic green pipes, a section that looks similar to Princess Peach’s castle, and the iconic star, all taken from the Super Mario video game series.

Two rides have been confirmed for Super Nintendo World, and those will be named Mario Kart, and Yoshi’s Adventures.

Park attendees can purchase smart wristbands – perfectly named Power Up Bands – which will keep track of their game scores and will virtually collect items when paired with a user’s smartphone app.

Last month on June 27, Attractions Magazine posted to their Twitter page to share with everybody some of the features Super Nintendo World will have on display.

As you can see below, the haunting red eyes from Bowser’s Castle is just one of many interesting additions attendants can witness during their time at Super Nintendo World.

Universal Studios Japan has slowly begun re-opening its doors to pass holders – and although visitors are having to wear safety masks and practice social distancing rules – it may not be too long until our beloved Super Nintendo World debuts.

Are you eagerly anticipating the opening of Super Nintendo World? Will you be attending as soon as it opens? Make sure you share your thoughts and let us know in the comments.