Freaked DISCOVER THE ART OF PUBLISHING
Home Halloween Boooo-opoly: You Can Now Get A Halloween Version Of Monopoly 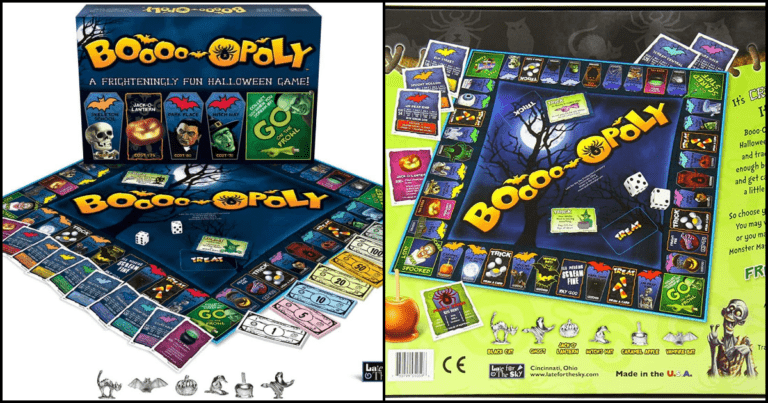 Monopoly is quite easily the cream of the crop when it comes to board games, and with its popularity came numerous different versions and spinoffs.

Famous movies, television series, cartoons, and video games have had their own adaptations of the iconic board game, but this new Halloween Monopoly could well be our favorite.

Understandably named Boooo-opoly, this Halloween-themed special edition of Monopoly allows players to buy haunted houses, collect $200 when you “Scream By” (pass) “Go on the Prowl” (GO!), land on terrifying properties, and instead of going to jail, unfortunate players will miss turns being “Scared Stiff”.

Regular players won’t have to learn much as the general rules of the game remain the same.

This really is the perfect game for fans of Halloween, horror, or anything dark, as players will have the chance to play two separate versions of the game.

First, you can play the traditional Monopoly rules which, of course, runs for hours and hours just waiting for somebody to either give up due to sleep deprivation, or lose the good old fashioned way.

The second way of playing Boooo-opoly is intended for quick-fire one-hour games, which makes things a lot more competitive from the start, and a much easier game to play overall.

If you’re interested in this haunting version of the iconic Monopoly board game, you can head over to Kohl’s website, HERE, or if you prefer, you can order yourself one from Amazon, HERE!

Fan of horror-themed board games? Go over and read about the upcoming, officially licensed, Friday the 13th board game set for a summer release, HERE!

Will you be ordering yourself or somebody you know a Boooo-opoly board game? Do you already own one and have opinions to share with us regarding the game? Be sure to comment your thoughts on the subject down below.