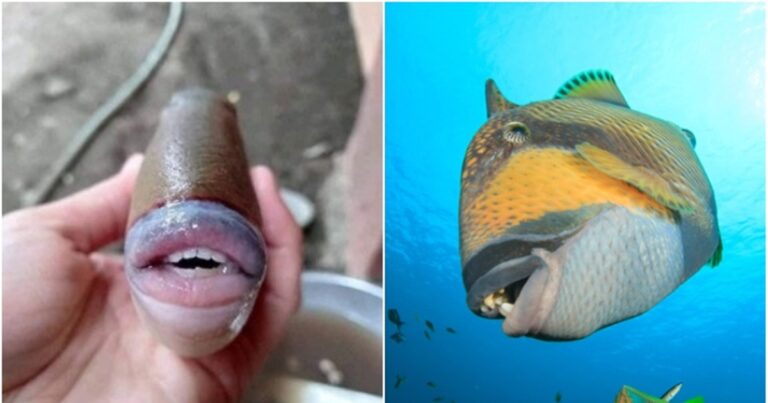 There are quite a few weird animals on the planet. They get even weirder when you make your way underwater. On top of that, things can get much creepier the farther down you go. One of the scarier fish that can be found is the triggerfish, though it can be found in relatively shallow water. The main reason for how creepy it is? It has a human-like mouth.

The fish has regularly made it viral on social media, with these outbreaks being spread apart just enough for people to forget about it before being reminded. However, this hasn’t made it any less creepy. Typically found near coral reefs in southeast Asia, the fish are known for being quite territorial and attacking when they feel threatened. This extends to humans.

Divers in areas where triggerfish are known to nest make sure that they don’t get too close. Those that do have been charged and bitten repeatedly by the creepy fish. The scary thing about this is that they’re teeth are adapted to crushing shells. As a result, they don’t have much of an issue making holes in diving suits and flesh.

While the bite marks are relatively small, it’s not a pleasant experience. Thankfully, the majority of divers shouldn’t need to worry about accidentally swimming up to them. In fact, they’re typically found in Malaysian waters, with most being around Redang, Tioman, and Sipadan, as these have the largest coral reefs. Regardless of how terrifyingly creepy they are, they’re a vital part of the area’s ecosystem.

This is mainly the case because the triggerfish are bottom-dwellers; fish that feast on prey from the ocean floor. As they dig up this prey by moving around debris, smaller fish can subsequently swim around and collect the leftovers. Because of the aquarium trade, there are fewer of them in the wild every year, although researchers are currently trying to breed them in captivity.