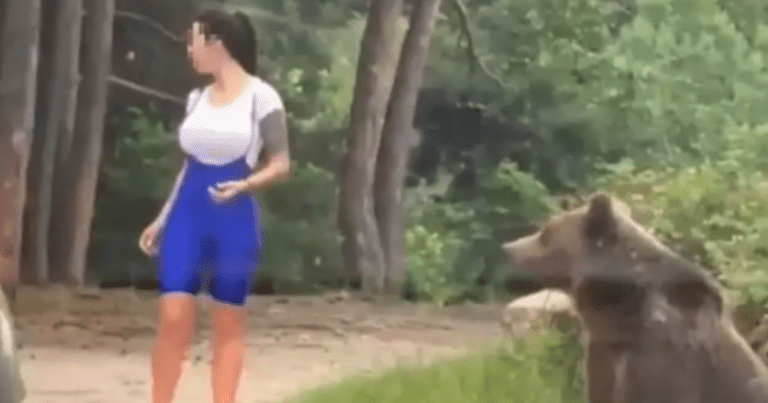 A woman gets the scare of her life after being almost attacked by a bear in Romania.

The unidentified woman was having a regular trip when they saw a bear that appears to be unthreatening near the road they’re driving. Possibly amused by the sighting, she goes out of her vehicle to stand near the wild animal without hesitation.

Before she even took a selfie with the bear, the wild animal suddenly leaps out at the woman and seems like it is about to attack.

Fortunately, the bear was just trying to scare the woman off as it looks like it couldn’t be bothered. The woman trying to snap a photo was lucky to be able to run quickly from any potential attack.

Someone recorded the incident from another car and was in complete shock to what happened. In the video, a person can be heard from a distance describing the woman as “stupid” and that it was ridiculous for her to try and get a picture with the wild bear.

Watch the recording of the shocking incident below.

Authorities from Romania have already issued warnings for drivers and travelers to treat the bears standing on the roadside as if they’re pets. They noted that “the bears are wild animals protected by law, and is not a pet.”

What are your thoughts on this shocking incident between a woman and the bear about to attack her? Share your reactions in the comments section below.

Talking about humans that have had close encounters with wild animals, did you see when a family of Lynxes showed up at an Alaskan photographer’s porch. Click here for the full story.