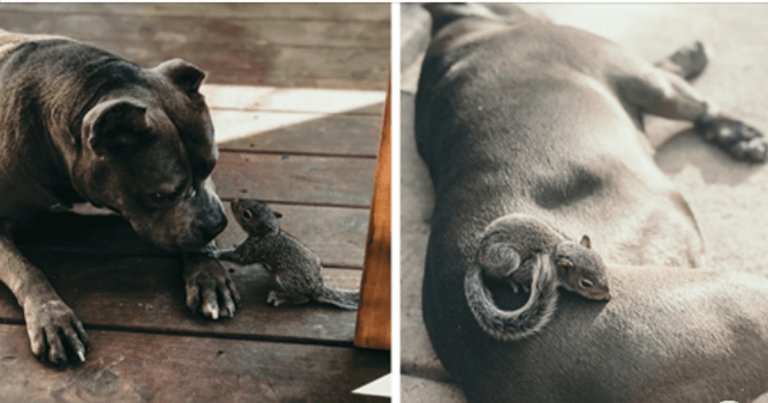 Pit bulls are one of the dog breeds that get an unnecessarily bad reputation despite being naturally kind and caring, and we think that we have some proof of just how great pit bulls can be.

Everly is a pit bull who was rescued by a woman named Morgan Joy Groves who says that her adopted canine companion tries to become friends with everyone and everything at the first opportunity, and that was certainly put to the test when an inquisitive baby squirrel started hanging around Everly.

A friend of Groves helped her post a video of the now inseparable twosome to Reddit, and it quickly became extremely popular as it showed the besties resting together. Not only that but the squirrel appeared to be calmly be sitting on top of Everly and when the dog started to move, it started clinging on.

They quickly made napping together a habit, as you can see from Morgan’s Instagram post below. Some commenters thought that due to the fact that the squirrel had clearly either lost its mother or been abandoned it clearly saw Everly as a surrogate. Groves comments on one of the adorable photos of the pair “Everly has such a special talent of always being able to make new friends”.

Everly took to caring for the baby squirrel as best she could, often grooming it and making sure it was warm, but Groves soon realized that taking care of such a young wild animal may not have been something that she and Everly could do alone.

After reading around what the squirrel would need to survive and flourish, Groves realized that there were many inherent risks and trials that she simply was not prepared for. With a heavy heart then the two were separated for the last time as Groves took the infant squirrel to a nearby wildlife center to be raised.

“Our little squirrel friend was brought to a wildlife center where it will be nourished and taken care of” explained Groves when she posted the final photo of the two unlikely companions “There are two other squirrels his age that he will grow up with, and when ready, be released back into the forest together as a family”.

A fairly bittersweet end to this flourishing friendship then, until Everly befriends another woodland critter, but go and check out the story of the precious pitbull for yourself on their Instagram Page!

All image credits to Instagram/@Belleandbev